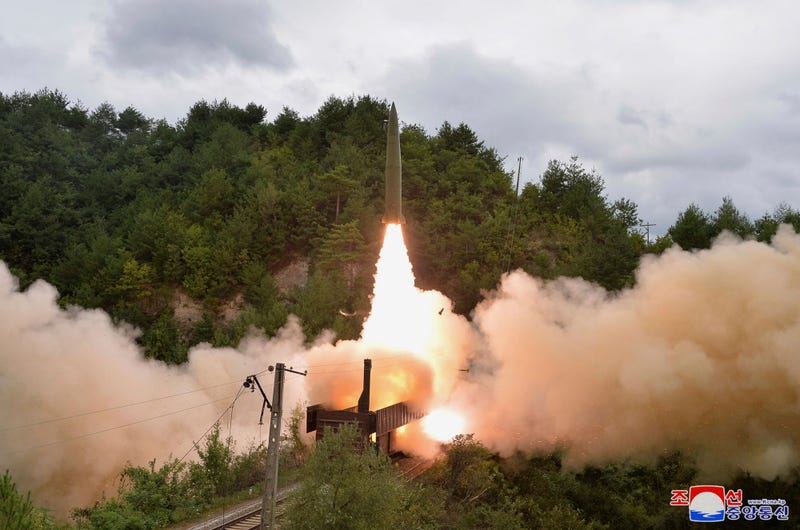 SEOUL, South Korea (AP) — North Korea said Thursday it successfully launched ballistic missiles from a train for the first time and was continuing to bolster its defenses, after the two Koreas test-fired missiles hours apart in dueling displays of military might.

Wednesday’s launches underscored a return of the tensions between the rivals amid a prolonged stalemate in U.S.-led talks aimed at stripping North Korea of its nuclear weapons program.

Pyongyang’s official Korean Central News Agency said the missiles were launched during a drill of a “railway-borne missile regiment” that transported the weapons system along rail tracks in the country’s mountainous central region and accurately struck a sea target 800 kilometers (500 miles) away.

State media showed what appeared to be two different missiles streaking up from rail-car launchers engulfed in orange flames along tracks surrounded by dense forest.

A rail-based ballistic system reflects North Korea’s efforts to diversify its launch options, which now includes various vehicles and ground launch pads and may eventually include submarines. Firing a missile from a train could add mobility, but some experts say North Korea’s simple rail networks running through its relatively small territory would be quickly destroyed by enemies during a crisis.

The South Korean and Japanese militaries said earlier that North Korea’s two short-range ballistic missiles landed inside Japan’s exclusive economic zone but outside its territorial waters. The last time a North Korean missile landed inside that zone was in October 2019.

Pak Jong Chon, a senior North Korean official who has been seen as influential in the country’s missile development, said Wednesday’s tests were successfully conducted in line with the “strategic and tactical design and intention” of the North’s ruling Workers’ Party.

In another weapons display over the weekend, the North said it tested new cruise missiles, which it intends to make nuclear-capable, that can strike targets 1,500 kilometers (932 miles) away, a distance putting all of Japan and U.S. military installations there within reach.

Hours after the latest North Korean launches, South Korea reported its first test of a submarine-launched ballistic missile. As President Moon Jae-in and other top officials watched, the missile flew from a submarine and hit a designated target, Moon’s office said.

Kim Yo Jong, the powerful sister of the North Korean leader, threatened a “complete destruction” of bilateral relations over Moon's comments while he observed the test, when he said the South’s growing conventional missile capacities would be a “sure deterrence” against North Korean provocation.

South Korea, which doesn’t have nuclear weapons and instead is protected by the U.S.’s, has been accelerating efforts to build up its conventio