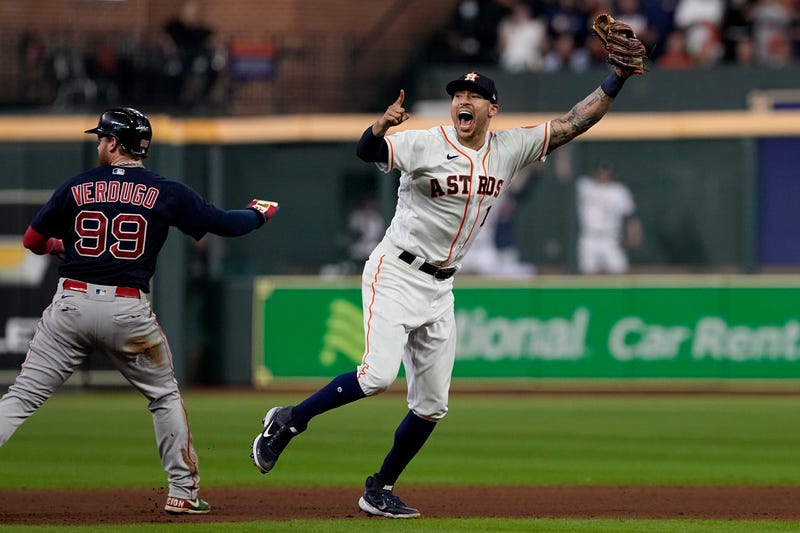 HOUSTON (AP) — Backs against the wall — occasionally by their own doing — these Boston Red Sox proved hard to pin down.

The Houston Astros finally got them for good Friday night.

Boston’s bats went quiet for the third straight game and the Red Sox bowed out of the AL Championship Series with a punchless 5-0 loss to the Astros in Game 6.

They had just two hits Friday, baffled by starter Luis García and a quartet of relievers, and combined for just three runs and 10 hits over the final three games of the series.

The wild-card Red Sox arrived in Houston needing consecutive victories to avoid elimination and keep alive their pursuit of another World Series title after winning in 2018.

Instead, they barely showed up.

Such a muted dismissal hardly fit with the rest of the team’s season. This was a club with a knack for exceeding expectations — even when they were the ones undercutting their own chances.

Boston was hardly projected as an October favorite entering the year. Manager Alex Cora was fired prior to the 2020 season for his involvement in Houston's 2017 cheating scandal, and Mookie Betts was salary dumped to the Dodgers a month later. No surprise, then, when Boston sank to last place in the AL East in 2020.

Even with Cora rehired in November, little better was expected this spring. Instead, the Red Sox emerged rejuvenated and ready to challenge for a postseason spot, leading the division for much of the first half behind resurgent stars Xander Bogaerts and Rafael Devers, plus free-agent acquisition Kiké Hernández.

Nathan Eovaldi emerged as a Cy Young Award contender, Eduardo Rodriguez rebounded from a COVID-related heart illness that kept him out of 2020, and ace Chris Sale was expected back in the second half after two years gone following Tommy John surgery.

A COVID-19 outbreak in the clubhouse threatened to derail that rolling start.