CLEVELAND, Ohio (92.3 The Fan) – The Browns will kick off the season in Carolina against the Panthers, they are scheduled for a pair of primetime games against divisional opponents, will host the Saints on Christmas eve and have two more flex dates built into their 2022 schedule.

The home opener will be September 18 against the New York Jets followed four days later by a Thursday night Amazon Prime appearance against the Steelers at home.

All games except two flex dates and the two primetime games are scheduled for 1 p.m. kickoffs.

“It’s always an exciting day when you get the schedule,” head coach Kevin Stefanski said. “For months, we’ve known who were playing and where, but to see how it unfolds, where our bye week is and where our division opponents are is fun for our coaches. That first opponent is something you look at so you can start to work on their coordinators, understand what they’ve done and try and get a head start on that game.”

The Browns will host the Bengals on Monday Night Football, which falls on Halloween.

Their two flex date games are a Week 15 home game against the Ravens which will be played December 17 or 18 and the season finale in Pittsburgh Week 18 will be played January 7 or 8, 2023.

In Week 4 the Browns travel to Atlanta October 2 to face the Falcons followed by home games against the Chargers and Patriots October 9 and 16.

The Ravens host the Browns in Baltimore October 23.

The bye week falls in Week 9.

“You always like having the bye week smack in the middle,” Stefanski said. “We’ll play eight games, then take a break and play nine games.
I think there’s benefits to having it in the middle of the season.”

Out of the bye the Browns will play four games in five weeks on the road starting with an AFC East back-to-back at Miami November 13 and Buffalo November 20.

Tom Brady and the Buccaneers visit FirstEnergy Stadium November 27 followed by trips to Houston and Cincinnati December 4 and 11.

In Week 17 the Browns travel to our nation’s capital to play the Commanders on New Year’s Day. 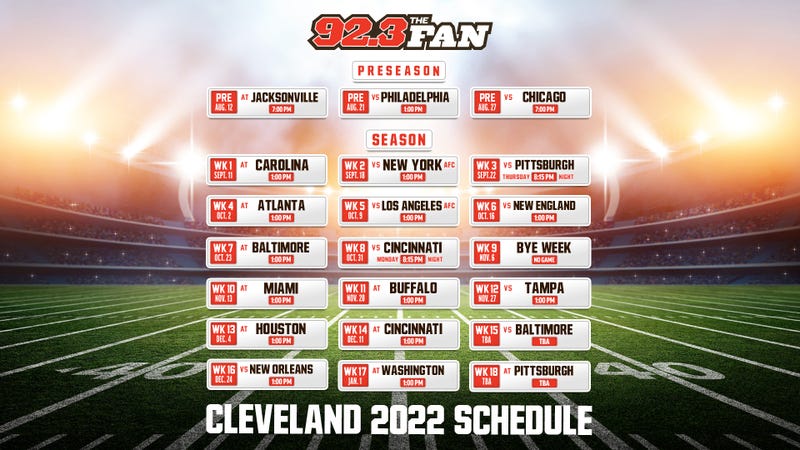 For a second straight year the Browns will travel to Jacksonville to play the Jaguars in the preseason August 12 at 7 p.m. followed by home games with the Eagles and Bears.

Philadelphia will participate in joint practices during training camp with the Browns prior to the August 21 preseason game that will kick off at 1 p.m. The preseason finale will be August 27 at 7 p.m.