CLEVELAND, Ohio (92.3 The Fan) – For everyone questioning why even play Deshaun Watson, who faces a minimum of a six-game suspension after sitting out last season, Friday night in Jacksonville, that’s why.

On a positive note – a few rookies shined bright.

Here are our top takeaways from Friday night’s preseason opener, a 24–13 win over the Jaguars.

1. The final score doesn’t matter. The preseason for coaches and the front office is about evaluating players. Keep that in mind before freaking out over things that did not go well.

2. On that very subject, Watson looked rusty, and the offense disjointed in his three series that saw him complete one pass for seven yards. Penalties, dropped passes, and a fumble torpedoed all three offensive series for Watson. The Browns totaled 11 offensive yards to begin the game with the pseudo first-team offense. 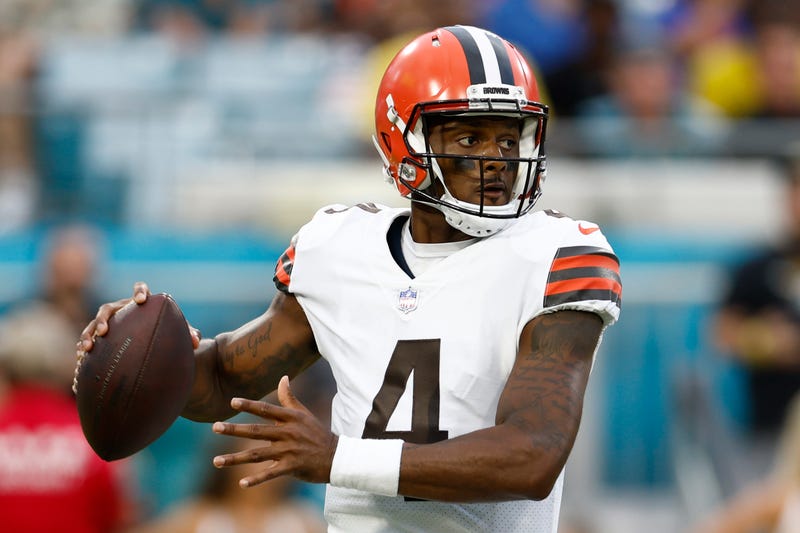 3. Prior to the game, Watson apologized to the women affected by his alleged behavior while with the Texans in 2020 and 2021 that led to 25 lawsuits being filed against him in civil court. The Browns continue to do a great job controlling the narrative and it’s not a surprise that Watson’s apology came in an interview controlled by the team on their pregame show rather than a press conference. Fans at camp have been falling over themselves to get Watson’s autograph and have their kids take pictures with the embattled QB, who has been accused of sexual misconduct on a level the NFL has never seen before.

4. Center Nick Harris was carted off after the second offensive snap with a right knee injury and was ruled out for the remainder of the night shortly after. Ethan Pocic replaced Harris in the lineup. Watson had trouble with a snap from Pocic to begin the second offensive series but losing Harris is a big blow. It should be noted that JC Tretter, cut by the team in the spring in a salary cap savings move, remains a free agent and available. 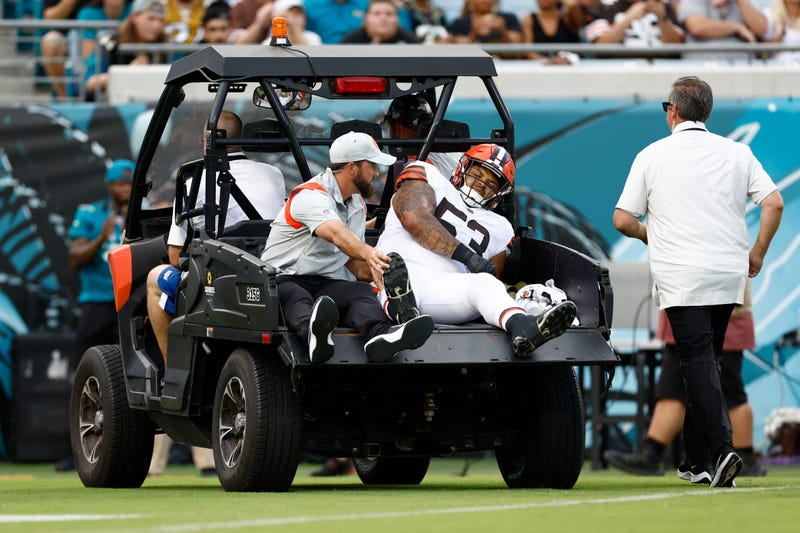 Cleveland Browns center Nick Harris (53) is carted off the field during the first quarter of a preseason game against the Jacksonville Jaguars at TIAA Bank Field. Photo credit Douglas DeFelice-USA TODAY Sports

5. D’Ernest Johnson fumbled on second down, which was recovered by Jacksonville’s Shaquill Griffin, ending Watson’s second possession.
Johnson carried three times and was not credited with gaining a yard. 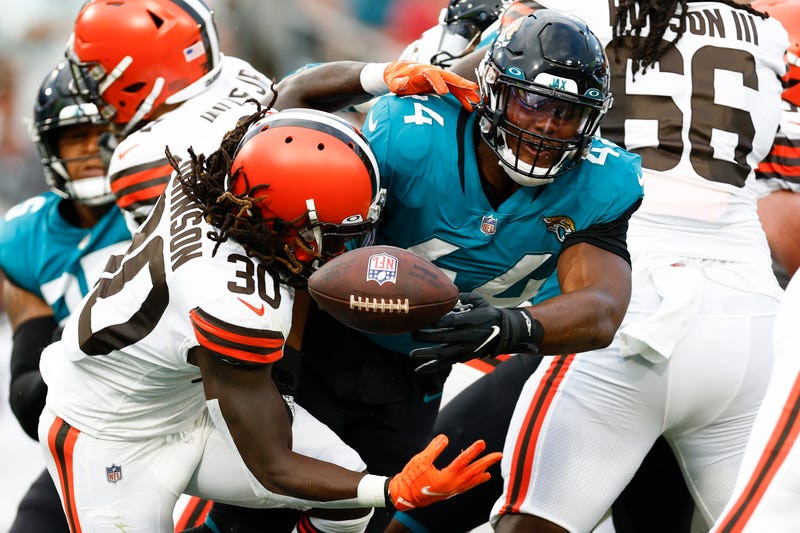 6. The Browns are counting on Anthony Schwartz this year to step up at receiver, but Schwartz is struggling. The 2021 third-round pick hasn’t been sharp in camp. He had a drop on second down during the first offensive series that resulted in a three-and-out and another drop during the third offensive series.

7. The third offensive series with Watson was a dumpster fire. Holding penalties on Donovan Peoples-Jones and Jedrick Wills – the Wills flag was declined – plus a false start on Michael Dunn and a dropped pass by Schwartz led to a second three-and-out in three offensive possessions.

8. After Josh Doobs took over at QB, things began to look up for the Browns. Dobbs, who is competing to be Jacoby Brissett’s backup to begin the season, played very well against Jacksonville’s backups. Dobbs finished 10-13 for 108 yards, a touchdown and a 126.4 rating.

9. Rookie running back Jerome Ford had himself quite the night. Ford ripped off 41 yards during Dobbs’ first series and scored from five yards out to cap the drive that cut Jacksonville’s lead to 13-7 midway through the second quarter. Forbes caught a 14-yard touchdown from Dobbs out of the backfield with the quarterback rolling left and tossing a perfect lob to him. Ford’s lone blemish was a fumble at the Jaguars 15 killing a drive.

10. Rookie cornerback Martin Emerson, who has flashed in camp, showed why teams avoided throwing in his direction in college. Emerson ripped the ball out of the hands of Jaguars receiver Jeff Cotton Jr., and went the other way 75 yards for a pick-six that gave the Browns their first lead, 14-13, with less than a minute to play in the first half. 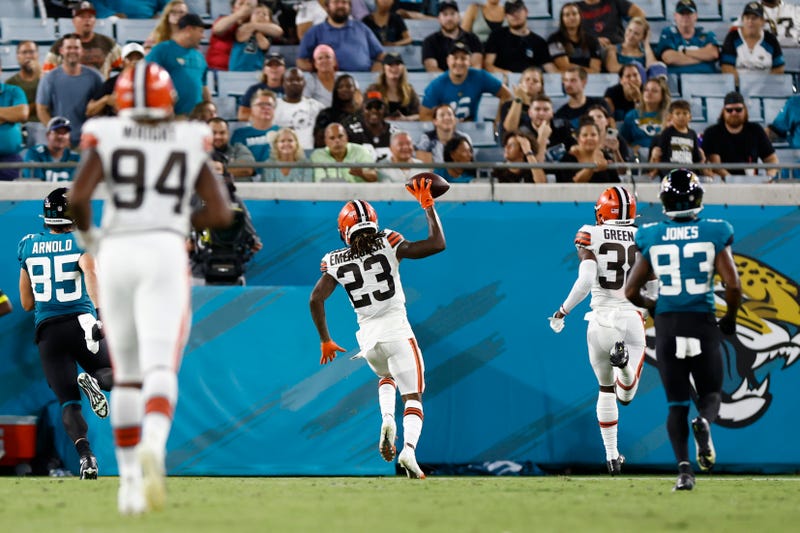 Cleveland Browns cornerback Martin Emerson Jr. (23) runs an interception back for a touchdown during the second quarter of a preseason game against the Jacksonville Jaguars at TIAA Bank Field. Photo credit Douglas DeFelice-USA TODAY Sports

11. Sticking with the rookies, kicker Cade York made all his kicks – three PATs and a 31-yard field goal. Three of his five kickoffs went for touchbacks.

12. Seventh round pick Isaiah Thomas recorded a pair of sacks and all three of his tackles were for a loss.

13. A tough week of work awaits the Browns after this one. They will host the Eagles for joint practices next Thursday and Friday in Berea before the two teams play in nine days down at FirstEnergy Stadium.