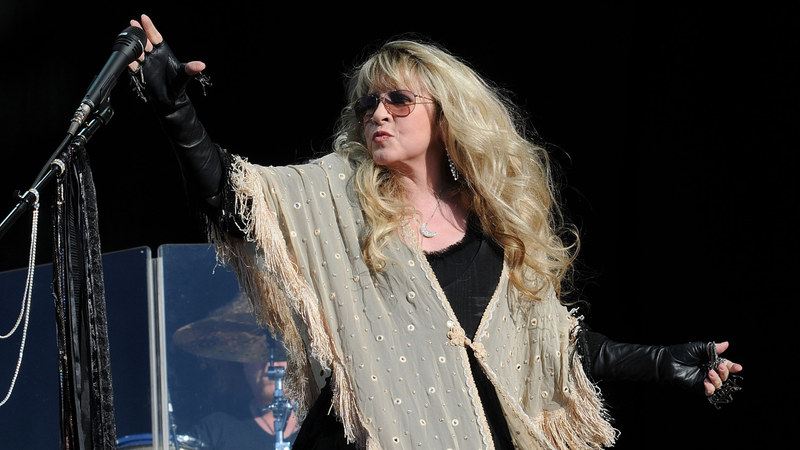 It’s nearly impossible to put a number to this, for example, try to create a top ten list because there are just too many amazing women to mention - many of whom smashed stereotypes, took chances outside the norms, and didn’t concern themselves with fitting in…they just wanted to rock, sing, play or perform and so they went for it. And boy are we glad they did!

Because this was a difficult challenge for me, I enlisted the help of friends, family, and neighbors and asked them to pick only one female artist as their absolute favorite. This yielded some very cool results so, of course, I’m sharing them! I’d also love to get your number one choice, so please feel free to contribute via email, Facebook, or Instagram where I’ve been posting a new female rocker every day. The struggle is real, so while it was difficult for most people to choose, I insisted on just one and they came through with some great picks!

Like me, my friend and neighbor Karen had a hard time picking just one. She returned my email with three solid choices: Stevie Nicks, Pat Benatar, and Janis Joplin. After some discussion, she chose Janis as her number absolute favorite. While she adores Stevie’s free spirit and sound, Pat Benatar’s warrior strength, and attitude, Janice won the day due to the fact that she stayed true to her rock/blues style and appeared not to care or conform to anyone else’s way of thinking. Admittedly, I was pleased with Karen’s decision; Janis was insanely gifted, but sadly also suffered addiction which eventually got the better of her. But in her short time on the rock and roll planet, she certainly made the most of it! If you’ve never seen the film “Monterey Pop,” I highly recommend it if only for Janis’ performance with her then band Big Brother and the Holding Company. In the film, Mamma Cass (Eliot) is sitting right up front watching her performance in complete awe, with literally her mouth hanging open! At one point you see her comment “oh wow” as if she’s witnessing a talent like none other…and of course, she was. In a career that basically spanned less than 6 years, Janis Joplin left us with unforgettable songs and even more unforgettable performances.
She’s one of those artists (alongside Hendrix) that I wish I had been born earlier to witness that tangible rock energy live.

All the women that have been inducted into the Rock and Roll Hall of Fame got a mention from my informal focus group…one of my sisters chose Joni Mitchell, the other Etta James, and of course, the very first woman to be inducted, Aretha Franklin has a place very near the top! Aretha, after all, is the “Queen of Soul,” earning that title as early as the 1960s with songs like “Respect,” “A Natural Woman,” and a song I still sing in the shower “Chain of Fools!” If you listen to these songs in 2021, they sound so current, like they could’ve been released this year. That for me is the mark of a true rock star, not sales, or how many grammy’s are on their shelves. Although it’s important to point out that Aretha Franklin has 18 GRAMMYs and remains one of the best-selling music artists of all time (according to Wikipedia) having sold more than 75 million records worldwide.
She also was awarded the National Medal of Arts, the Presidential Medal of Freedom, and an induction into the Gospel Hall of Fame. All hail the Queen!

Like me, you may have a friend who lives to go to concerts…I’m talking over 150 shows/year, except last year of course. My friend Pam is very eager to get to one of Philly’s incredible live venues and rock out in a big way. So, of course, I had to get her pick for her favorite female artist. She’s seen them all live, Pretenders, Go Go’s, B-52’s, Blondie, No Doubt, and I’m just scratching the surface here. Without a moment's hesitation, she chose Blondie and had this to say: “Debbie Harry is a legend, a true ground-breaker, and has influenced so many musicians that came after her. She did and continues to do everything with style, substance, and strength!”

Like everyone else, I had a hard time narrowing my choice to one spectacular female artist…and took a long look at a few to make my decision. Like my friend Pam, I’ve seen so many concerts in my lifetime (and hope to see lots more)! I will say the first time I heard Chrissie Hynde in 1979 (singing “Brass in Pocket”), I wanted to BE her. The sound, the look, a chick fronting an otherwise male rock band…yes, I wanted to live that life! I still feel that way now and again when I hear a song the Pretender’s covered (their first single) “Stop Your Sobbing” written by Ray Davies of the Kinks, or my all-time favorite song “Middle of the Road,” but there can be only one Chrissie Hynde and she rocked it! Plus I quit guitar lessons after about 6 months…commitment is important and typically doesn’t happen until you find the thing you were meant to do. I feel like Chrissie Hynde came out of the womb a rockstar…Bonnie Raitt was probably born with a guitar slide pic in her hand, Etta James brought down the house when she was two, Janis (who tried to fight it) just knew what she was born to do! Gwen Stefani had dare I say “No Doubt,” what she’d be doing at a young age, I think she was all of nineteen the first time I saw her live. And I’m sure the band Heart invented the power ballad right? Heart may not have invented it, but they certainly perfected it!!! I could go on here, but everyone has their favorites…the list is long, subjective, personal, and based on all of our memories and experiences with music.

That brings us to my all-time number one and it’s got to be Tina Turner. This queen deserves a spot in the Rock and Roll Hall of Fame to herself, not just as part of Ike & Tina Turner. We all know now, Ike treated Tina (and others) horribly. In spite of it all when Tina took the stage, she left the bad stuff behind and brought all the great stuff front and center - she absolutely slayed. I was lucky enough to see Tina on my 28th birthday at Universal Studios in California and it was a life-changing experience, one I will never forget. The only other person who I get this excited about all these years later is Prince. Tina and Prince have this in common - they never ever held anything back…they wanted their audiences to feel all the feels and made sure we did.

Tina Turner is eighty now so she was about 45-ish when I saw her perform. So many things strike me about the show, I don’t even know where to begin. First, the way she blends soul, rock, and pop together like a perfectly mixed cocktail is mind-blowing. She absolutely struck the perfect balance crossing racial and genre lines at a time when no one else was or could. Her sexy signature raspy vocals just took hold like Svengali and never let go. The way she moved and sang effortlessly was nothing less than magical; this while standing between two much younger vocalists and dancers! You can’t buy that kind of confidence, you either have it or you don’t and in the eighties, Tina had it all and more. Having a great set of legs, and really cool dance moves didn’t hurt and she worked it all into her brilliant act. I left that show feeling like I could conquer the world…to this day it remains the best birthday ever!

Of course, my friends and I are all of a certain age, so our rock star idols are as well, but this generation has some of their own superstars who I hope have done their homework and looked back on the greats of the past! I know Lady Gaga did I’m a big fan. Like Chrissie Hynde before her collaborating with Frank Sinatra, Cher, and more, Lady Gaga mixes things up by collaborating with Tony Bennett, Beyoncé, Florence and the Machine, and our own Bradley Cooper. How fun to have the confidence and talent to sing with Bennet and Beyoncé!!! She is fierce and fearless, and now finding her way in the acting arena…she was perfection in “A Star is Born.”

I look forward to hearing much more from Billie Eilish, Megan Thee Stallion, Taylor Swift all of whom are representing in their genres - there’s something for everyone, but the common denominator is they are all fierce! Cardi B, like her peers, is certainly changing the game - her first album “Invasion of Privacy” broke streaming records and debuted at number 1 on the Billboard 200. She’s the first female rap artist to win a GRAMMY as a solo artist and ushered in a dance that basically everyone on the internet imitated, some better than others!

Rock, rap, pop all have their next-generation superstars, so generations to come will continue to enjoy Women Who ROCK! Who’s your favorite, new or old…feel free to email me and let me know - marilyn.russell@entercom.com