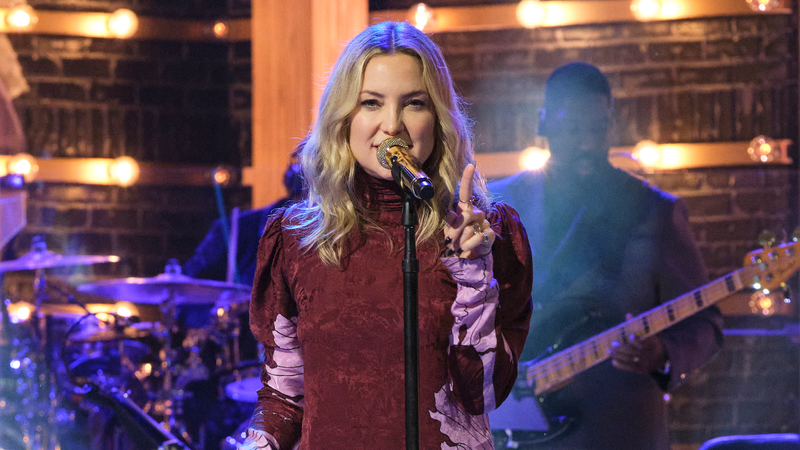 After years of gifting fans with her singing skills here and there during various TV appearances, Kate Hudson is finally giving the people what they want. Yes, the certified rom-com queen teased she’s working on an album.

Looking effortlessly cool and casual in a recent Instagram post, Kate is seen singing onstage alongside a guitarist and a cameraman. “Finally realized it’s time to say f#%! it and saaaannngg!!!!!,” Kate captioned the two pics, along with hashtags "#albumincoming" and “#myikigai,” which is a Japanese concept meaning a person's sense of purpose or reason for being.

And if you peep the comments section, you’ll find that we weren’t the only ones jazzed about the news. Her followers and famous friends flooded in with supportive replies — Janelle Monae said, “Yaaaaassssss fly my love !” And designer and stylist Rachel Zoe commented, "YESSSSSSSSSSSSSS FCKING about time woman!" Which model and actress Poppy Delevingne totally agreed with, writing, "F*** this is exciting.”

And we concur, but while incredibly exciting, real ones shouldn’t find this news too surprising, as Hudson’s been dazzling us with her musical talent for years. From her "Tiny Dancer" singalong in Almost Famous, to her iconic "You're So Vain" duet in How to Lose a Guy in 10 Days, and of course her guest role on Glee as Cassandra July, the difficult but later endearing dance instructor at the New York Academy of the Dramatic Arts aka NYADA.

Most recently, Kate reminded anyone who needed reminding about her singing abilities by performing a doo-wop cover of Ariana Grande's "7 Rings" on NBC's "That's My Jam" this past January.

So as you see Hudson has found sporadic ways to fulfill her “#myikigai,” with everything but an actual album, well now “it's time.”