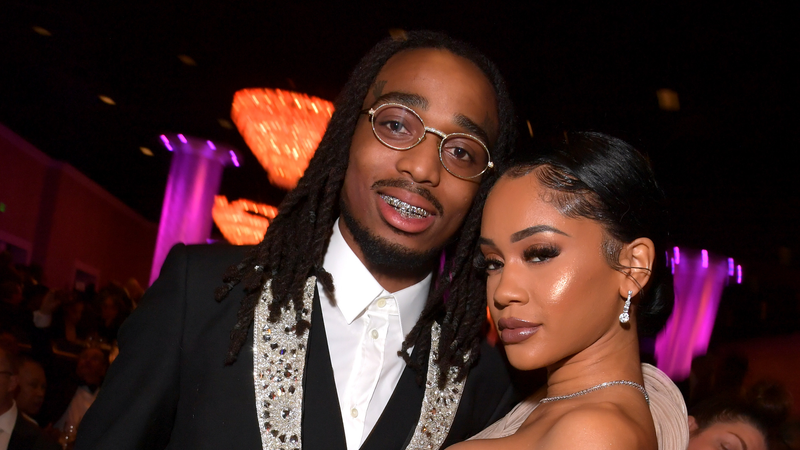 After some digging, fans uncovered that Saweetie and Quavo have unfollowed each other on Instagram, what have you done today?

Just as they were starting to become one of our favorite Hip Hop couples (Bey and JAY obviously being #1 obvi), it seems they might have called it quits. Saweetie was apparently the first to hit the unfollow button, followed by Quavo, so the theory is that she was the one to end the nearly three-year relationship.

Starting out quietly as a couple in 2018, it took them a few months to confirm they were dating, which Saweetie did a few months later  when she appeared on The Real. At the time, telling the hosts that they in the midst of getting to know one another, even calling him cute and revealed that the link up took off thanks to him shooting his shot in the DMs. By March 2019, their relationship was IG official, and Saweetie released her music video “Emotional” featuring her Migos rapper alleged former boo thang.

Since then, the two put their love on IG display, being all cute, posting pics, paparazzi shots and showing off the extravagant presents they gifted one another, including a custom Bentley Continental GT the "Stir Fry" rapper gave his sweetie Saweetie as a Christmas gift. And her returning the favor, going all out, gifting Quavo a $300k Richard Mille watch.

Interestingly, the very same day that fans started buzzing about a breakup, an episode of Respectfully Justin premiered with Saweetie dishing all about relationships. When host Justin LaBoy got personal and asked what the most “disrespectful” thing a guy had ever done to her was, Saweetie responded, “He break your heart. It’s the last straw.” Umm, she clearly didn’t name names, but the timing of the comment certainly seems a little sus if you ask us.

While neither yet commented on their relationship rumors, statistically speaking, an unfollow usually comes before a breakup announcement. Seriously though, what are the odds they both mistakenly unfollowed each other? We might not agree with her spaghetti topping choices, but we feel confident in her IG skills. And while we hope not, we're sad to say we have a strong feeling that announcement is a comin’.