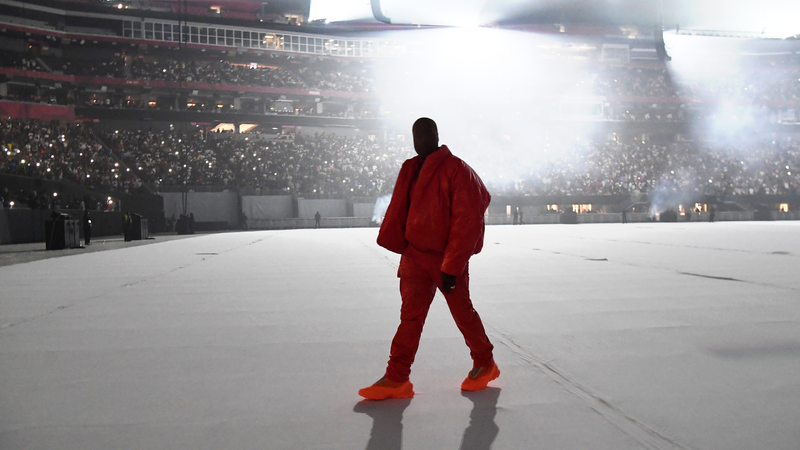 True Kanye West fans knew that his tenth studio album, DONDA was not coming out on July 23rd— contrary to reports.

The rapper canceled his performance at Rolling Loud in Miami and it's being reported that he's now living in the Mercedes-Benz Stadium in Atlanta until DONDA is finished. The stadium was where he held his listening party for the album on Thursday, July 22. Rumors began to spread after the Chicago native showed up to the Atlanta United game on the 24th in the same fit from the listening party. TMZ reports that Ye and his team "have created a studio space, living quarters and even have a chef to prepare his meals" inside the arena. Allegedly, he "was so inspired by the DONDA crowd" and thus, wanted to stay in the ATL until the album is done. The new rumored release date is August 6th. It hasn't been confirmed if there will be any new tracks that weren't heard at the listening event.

Media personality Justin Laboy tweeted, "KANYE WEST WILL MOVE THE RELEASE DATE OF DONDA TO AUGUST 6TH. THANKS FOR YOUR PATIENCE HE WANTS TO GIVE HIS FANS THE BEST POSSIBLE PRODUCT WITHOUT RUSHING ANYTHING. HE LOVES YALL WITH ALL OF HIS HEART. GOD BLESS."

All we know, for sure, is that the final word will come from Ye himself. In the meantime, check out his exclusive station on Audacy. It's always Yeezy SZN over here.