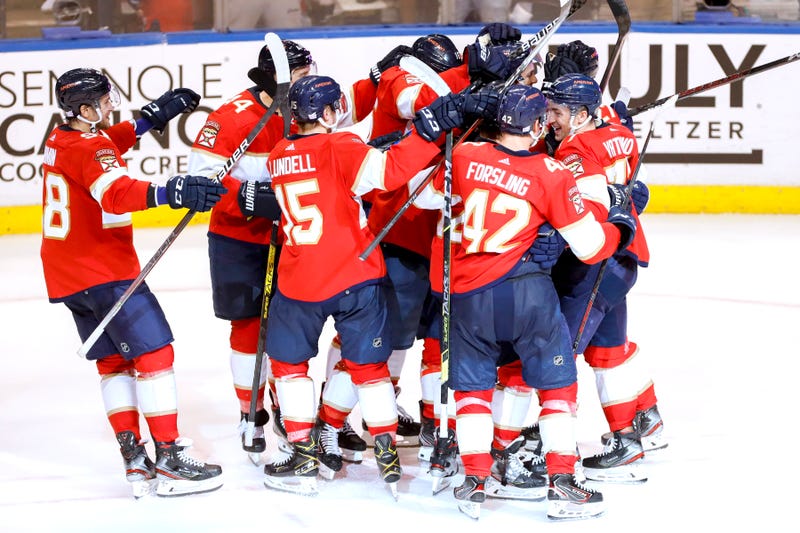 We’ve had some highly anticipated regular season matchups in recent seasons, but perhaps none bigger- especially for a November tilt- than what’s on tap for tomorrow night.

The 9-0-1 Florida Panthers, who are 6-0-0 on home ice, entertaining the 9-0-0 Carolina Hurricanes in a potential Eastern Conference final preview.  It’s two Stanley Cup hopefuls, the top teams in the conference, and the teams to beat from the Atlantic and Metropolitan Divisions, respectively.  The two deepest rosters, perhaps, in the entire National Hockey League, will go head-to-head tomorrow night at 6:00 PM in Sunrise.  Get your tickets NOW!

Congratulations are in order to Chase Priskie, whose NHL debut on Thursday was a monumental day for not only Priskie and his family, but also for the Panthers, and the entire South Florida hockey community.  November 4, 2021 was the day a South Florida-bred hockey player suited up for his hometown NHL team, and it’ll forever go down as one of the most important days in Panthers history.

Lastly, I want to issue a huge thanks to all of you great Panthers fans who’ve helped make FLA Live Arena a huge home-ice advantage for the team.  The Panthers are 6-0-0 on home ice after Thursday’s win over Washington, and your energy has not gone unnoticed.  We hope to see all of you again very soon; perhaps as early as tomorrow!

I have to ask what is your ultimate favorite Halloween candy & what is the one you consider to be absolute trash? Soup still shreds by the way… #DearDoug

Shawn The Hawk!  Great to hear from you here, sir!  Here’s a question from last week, but it’s never a bad time to talk about candy!

My opinion on candy is often very controversial; everyone here knows I’m a magnet for food controversy.  The whole soup consuming community is after me!  Kidding…  I’m a big coconut fan, so my favorite Halloween candy to receive was always Mounds and Almond Joy.  Unfortunately, I learned at a very young age that Mounds and Almond Joy would generally make up such a small percentage of my Trick-or-Treating haul that I questioned whether or not it was worth the time to walk up and down the street for a couple hours to maybe end up with 10 total Mounds and Almond Joy’s.  I guess I took an analytics-based approach to Halloween Candy as a kid.  By about seventh grade, I realized it was a much better use of my time and energy to buy a bag of Mounds and Almond Joy at a fine retailer near me, and skip the Trick-or-Treating part of Halloween.  I came out of retirement for one final Trick-or-Treating experience with a few friends during our senior year of high school in an effort to harken back to our youths.

To this day, any candy with coconut and/or dark chocolate is still what I’ll gravitate toward.  As far as a candy I don’t like… I was never a Dots guy.  I wouldn’t call them “absolute trash”, but I wouldn’t put them high up on my wish list either.

How much do you use analytics in broadcast preparation, do you have a metric that is a favorite to tell you about a team’s performance?

Great question from a longtime “friend of the program”!  For multiple reasons, I don’t get too much into new-age “analytic” stats on the broadcasts.  First of all, anyone who has listened over the years probably has noticed that I’m not a huge stats guy.  Stats are obviously important, and they tell us a lot, but on radio, they can be tough to follow.  Television has the luxury of showing graphics, and perhaps illustrating the in-depth importance of certain statistics a bit more than we do on radio.

When I was still calling games for the Lake Erie Monsters of the American Hockey League, I actually reached out to one of my all-time favorite broadcasters to critique a sample of my work; the late, great Dave Strader.  He couldn’t have been nicer, and took time to send me a detailed critique via email.  One of the pointers he gave me was to be careful of throwing out too many statistics in a short time, because overloading the audience with numbers could cause listeners to lose track of the information.  I thought this was very accurate.

If we’re talking about a stat that I feel trul