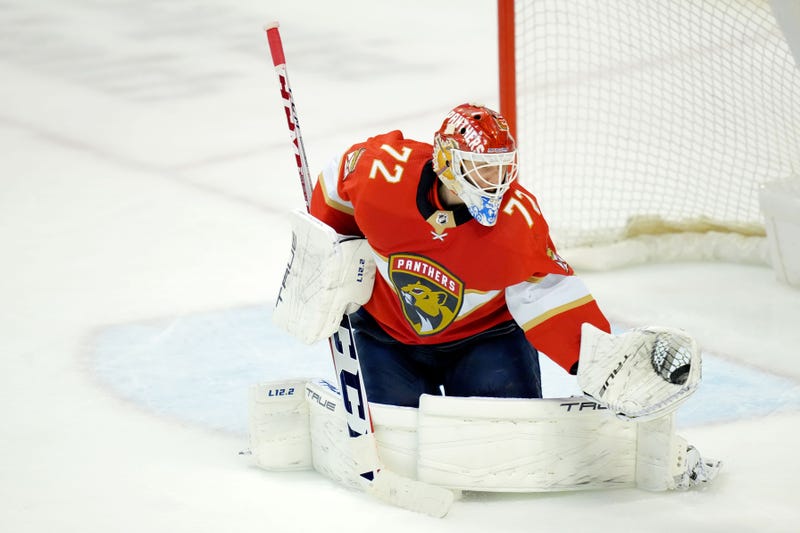 Last night wasn’t a win for the Florida Panthers, who fell 4-1 to the Los Angeles Kings, but full credit goes to the entire shorthanded active roster for battling to the very end. Despite being down a forward and a defenseman, and having four call-up’s from Charlotte of the AHL playing for the third time in as many nights, the Panthers totaled 42 shots on net against red-hot Kings goalie Jonathan Quick. Mackenzie Weegar, as expected, set a new career-high in time on ice last night, playing 32:31.

Local product Chase Priskie, playing in his second NHL game, logged 25:29 of ice time.  Along with Grigori Denisenko, Matt Kiersted, and Cole Schwindt- who made his NHL debut- played for the third time in as many nights.  The four call-up’s had helped Charlotte to back-to-back home wins over Rochester Tuesday and Wednesday night.  Even though playing three-in-three is common in the minor leagues, this was still a taxing 72 hours for the group, and they drew great praise from Interim Head Coach Andrew Brunette for their efforts.  Brunette said postgame, “I thought they brought a lot to the hockey game. I think they all played extremely well for us. I was really happy for them. It was a good opportunity. They stepped in and they played exceptional. For us coaches and organizationally, it was great to see them play at that level.”

It's a great nod to the organizational depth that General Manager Bill Zito and his hockey operations staff has accumulated.  With seven regular players entering COVID-19 protocol in the few days leading up to the matchup with Los Angeles last night, the Panthers were still able to field a talented group on the ice.

Congratulations are in order for Schwindt, who made his NHL debut, and for Kiersted, who scored his first NHL goal.  For a defenseman especially, his first goal was a great looking play, as he netted a backhand shot following a feed from Jonathan Huberdeau.

One other note: this is going to be the final mailbag of 2021!  Merry Christmas, Happy New Year, and Happy Holidays to everyone!  As always, thanks for reading, listening, and consuming Panthers hockey.  Consuming Panthers hockey in mass quantities, however you consume it, has been very good for you this year!  We’ll pick up the mailbag again in the New Year!  Until then, send along your questions on Twitter with the #DearDoug hashtag!

And now, your questions!

This was a much underrated layout; probably because it had some good rookie cards like Harold Baines, Kirk Gibson, and Fernando Valenzuela, but it lacked the huge rookie cards, which I’d think is why it falls into the underrated category.  I think it’s a better design than 1980 and 1982, but people remember those because the Rickey Henderson and Cal Ripken Jr. rookies, respectively, became iconic cards.  Just my two cents on that.

Favorite non-public spot in the arena... Like where do you either like to go and chill or where is there something that you find really interesting?

This won’t be anything groundbreaking or Earth-shattering to anyone, but my favorite non-public spot in the arena is Booth D in the press box, also known as the home radio booth.  I have a key to it, and there are a couple TV’s in it, so it’s a good place to eat lunch, jump on a Zoom call, record an interview, etc.  Depending on the day, it can be pretty chilly up there, so I just need to make sure I’m dressed accordingly.  There’s also a big picture of Bill Lindsay’s big series-clinching goal from the first round of the 1996 playoffs against Boston on the wall!  Great question!

#DearDoug you can create your own music festival.
Plagenspalooza. Who’s performing, and who’s the headliner?

And the second part…

Because it’s hard to narrow down the field, I put 17 bands on the Warped Tour-style festival bill (This thing’s going to start at 11:30 AM), and put together a four-band “Night Before” Pre-Party Show in addition.  There’s also an exclusive VIP after party!  The made-up lineups feature most of the bands I listen to on a daily basis.  Here’s the full run-down:

-Operation Ivy (It would be their first show since 1989.  It’s my festival, so I can reunite them.  If they can’t make it work, Rancid will fill this slot.)

Mustard Plug and CKY would co-headline the official VIP after party at an undisclosed nearby location.

Thanks for the questions, everyone.  ‘Til next time, folks!