"I think Chicago would lose their minds."

That's what longtime tight end Greg Olsen has to say about all the Russell Wilson trade buzz, should a deal somehow come into being, and we think he's probably correct in that assumption. 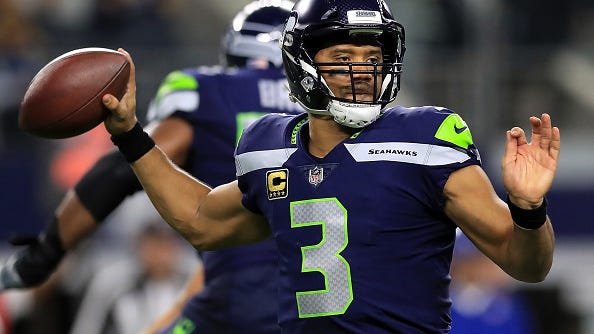 Olsen would know — he's a recent teammate of Wilson and he also played in Chicago for a good chunk of time, heading to the Bears as their 2007 first-round pick and staying there until after the 2010 season. And that whole "Chicago fans losing their minds" thing? It wouldn't surprise Olsen one bit. He talked about his experience with the Bears and the passionate fan base in the Windy City in a recent appearance on "The Colin Cowherd Podcast."

"It felt a little more like college," Olsen said. "You know, it felt a little more like a college environment... like, that day, that Sunday afternoon at Soldier Field, was the day of the week. It didn't matter if the Cubs were doing anything, the Blackhawks were doing anything. They loved their other teams, but it was a Bears town, and when the Bears were playing, the environment, the energy... it's just different.

"There's no casual nature to that stadium. There's nothing casual. I remember... I get there as a rookie, and I would have moms, older ladies, in the supermarket — the things they would say to you after a tough game, a good game, a loss — I would go home to my wife, I was like, these people here are crazy about the team. Almost, like, delusional."

And Olsen loved every second of it. He loved his four-year stint in town, totaling nearly 200 catches and 2,000 yards and scoring 20 touchdowns in that span from quarterbacks like Kyle Orton and Jay Cutler. He loved the whole experience... except for when they traded him away.

"I was pissed off as hell when I got traded from there. I mean, I was beside myself," Olsen said. "I'm like, I'm getting traded from the Chicago Bears — we just played in the NFC Championship in one of the coolest cities in the world — and I'm going to Charlotte, North Carolina?"

Olsen was dealt to Carolina for a third-round draft pick, which was subsequently packaged with another third-round pick to bring Brandon Marshall to the Bears. Eventually, after some good production, Marshall was traded away in exchange for a fifth-rounder, who eventually became Adrian Amos. All in all, the initial Olsen deal was one that confused and angered Bears fans and definitely wasn't the best move to make at the time — Jerry Angelo even called it a "mistake" himself — though following moves helped to partially make up for it.

From Olsen's perspective, considering he earned three Pro Bowl nods with the Panthers and racked up over 500 receptions and 6,000 receiving yards, his anger probably subsided fairly quickly. But he also notes how he and his wife had just brought their son home and painted a nursery for him, planning on raising a family there in Chicago.

"Here we are, bringing our kid home thinking Chicago is gonna be our home," Olsen said. "We're gonna raise our children here, what not. Six weeks later, leave my house, never step foot, my wife flies back there, sells it, I never step foot back in my house, fly to Charlotte, never went home again. Just, literally, in 12 hours."

How quickly things can change... and a certain someone else who's particularly relevant to the Bears' aspirations for 2021 could also experience a quick change of scenery. However, based on what we're hearing about Russell Wilson's frustration with the Seahawks, the quarterback probably wouldn't be quite as angry if he had to pick up his stuff and head over to Chicago should a swap somehow come to fruition.

music
Machine Gun Kelly, Kings of Leon, and Black Pumas will perform at NFL Draft
news
Mark McCloskey, gun-touting lawyer who confronted St. Louis protesters, considering US Senate run
music
Gabby Barrett reveals Carrie Underwood is one of 'The Good Ones' who's helped her out as a new mom
music
Change of plans: EDC Las Vegas will not be held in May, moves to October
music
David Lee Roth shares new artwork inspired by his time in radio
news
Man spots massive bear following him while jogging