We've officially reached #DraftTwitter season, and with that, Zach Wilson's NFL Draft stock appears to be shooting through the roof.

Wilson exploded in his junior season at BYU, tossing 33 touchdowns to just three interceptions, while racking up 3,692 passing yards. Clemson quarterback Trevor Lawrence is all-but certain to be the No. 1 overall selection, but it now appears possible that Wilson could leapfrog former Ohio State quarterback Justin Fields and be the second quarterback off the board.

While this probably wasn't someone employed by the Jacksonville Jaguars - owners of the top pick - an unnamed scouting director told Matt Miller of The Draft Scout last week that Wilson reminds him of Patrick Mahomes, saying he has Wilson ranked as the top quarterback in this year's class.

That's one side of things. The other side is that Fields tossed 67 touchdowns to nine interceptions during his collegiate career, also rushing for over 1,100 yards during his time at Georgia and Ohio State.

There are also some - including Benjamin Solak of The Draft Network - who have pushed back on just how ideal of a fit Wilson would be in the wide zone offensive, some version of which he would be asked to run if he was selected by the New York Jets or San Francisco 49ers, among other potentially quarterback-needy teams.

So who will be the second quarterback off the board? We tackle that and more in our latest RADIO.COM Sports 2021 NFL Mock Draft: 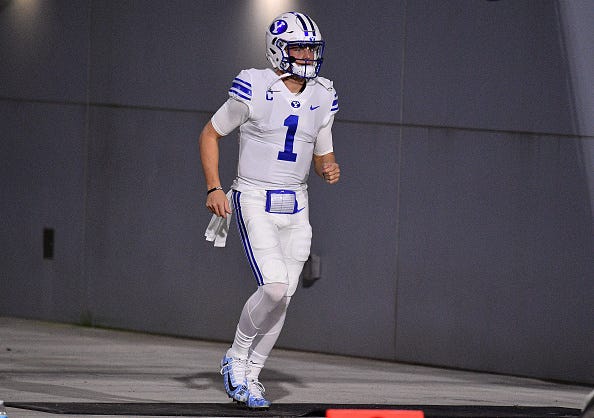 Zach Wilson is one of the most intriguing quarterback prospects in this year's class. Photo credit (Mark Brown/Getty Images)

Jets Pass on Wilson, Paving Ways for Panthers To Trade Up

For the time being, we're going to stick with the Jets taking Fields at No. 2 overall, though a variety of options are in play. The Jets could take Wilson instead of Fields. They could also move forward with Sam Darnold, which may very well lead to them trading out of this selection. Ian Rapoport of NFL Media reported Monday that the Jets plan to evaluate this year's quarterback prospects prior to deciding whether to trade Darnold or move forward with him, so this situation is very fluid.

Assuming the Miami Dolphins plan to proceed with Tua Tagovailoa, pick No. 3 will become a hot commodity. Teams will be eager to move above the Atlanta Falcons, who could draft Matt Ryan's successor at pick No. 4. Perhaps one of the most eager teams will be the Falcons division rivals, the Carolina Panthers. A source told Albert Breer of MMQB Monday that Panthers owner David Tepper is "obsessed" with finding a franchise quarterback. This trade up allows the Panthers to fill that need, while also preventing an intriguing prospect from landing with another team in the NFC South. 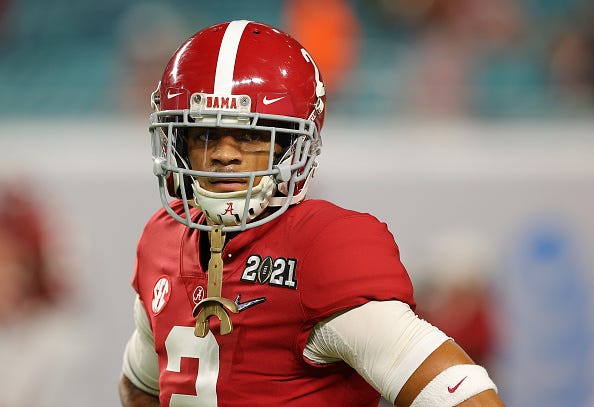 Finding an impact wide receiver is a pressing need for the Eagles, but frankly, so are a lot of things. We still acknowledge the strong possibility that they select either Ja'Marr Chase or DeVonta Smith (assuming either is available) at No. 6, but that's certainly not set-in-stone.

In this mock, the Eagles select former Alabama cornerback Patrick Surtain II, a 6-foot-2 20-year-old whose father made three Pro Bowls as a member of the Miami Dolphins. Surtain II could play across from Darius Slay, who the Eagles acquired from the Detroit Lions last offseason. Then again, Slay is 30 and the Eagles are probably a few years away from contending again. Don't be shocked if the Eagles - who find themselves in salary cap hell currently - entertain the idea of trading Slay this offseason. That would make cornerback perhaps the biggest need on the roster. 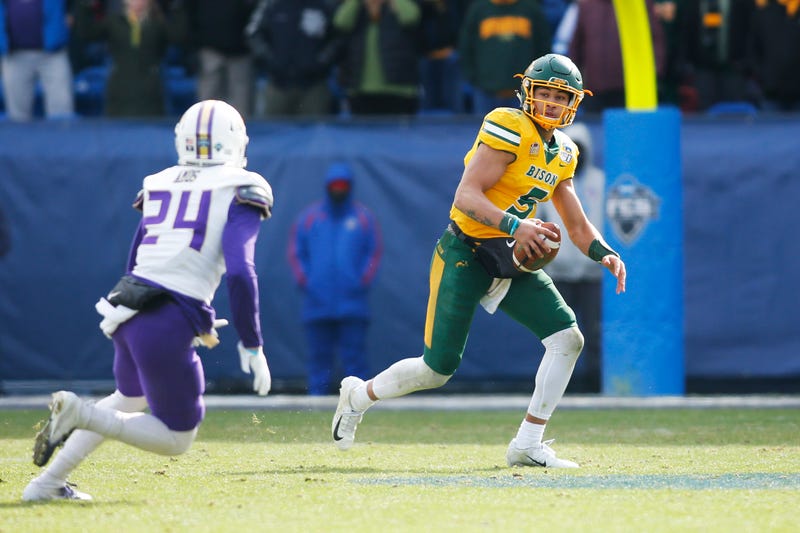 They say you don't want to be the guy that replaces the legend, but rather the successor to the replacement. Bill Belichick and the Patriots could turn things around rather quickly, but they need to find their long-term quarterback, because they badly missed Tom Brady in 2020.

It's entirely possible that Lance doesn't make it this far. Any of the Miami Dolphins, Atlanta Falcons, Philadelphia Eagles, Detroit Lions, Denver Broncos or San Francisco 49ers could take a quarterback above them, meaning all four of the top options are off the board by the time the Patriots get to make their pick.

However, there's a distinct possibility that all six of the teams mentioned above opt to either hold serve with their incumbent quarterbacks or sign a veteran. That would pave the way for this scenario, in which the Patriots move ahead of the Minnesota Vikings and select Lance, who tossed 28 touchdowns to zero interceptions in 2019 at North Dakota State, while also rushing for 1,100 yards and 14 touchdowns.

This offseason, the Patriots have more than $60 million of cap space to play with. If Belichick and company can find a solution at quarterback, New England could return to contention as soon as 2021. 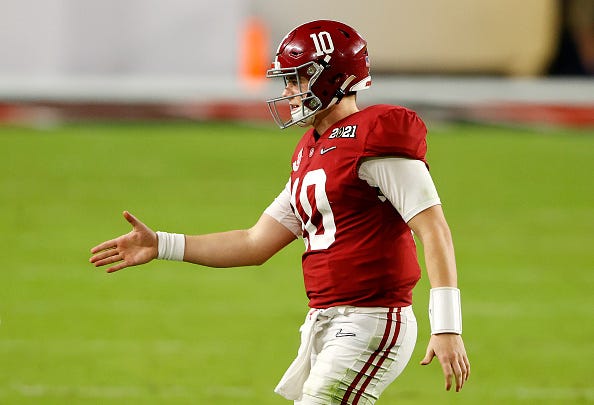 Led by Chase Young, Ron Rivera's Washington Football Team had a top-five defensive unit, which they rode to winning the lowly NFC East in 2020. Their offense isn't a finished product, but between Terry McLaurin, Antonio Gibson and J.D. McKissic, there's quite a bit of young skill-position talent present.

Desperately, though, the team needs to figure out the quarterback position.

Taylor Heinicke has been re-signed, and could open the season as the team's starting quarterback in 2021. Still, it's fair to have reservations about whether he could be a long-term answer. It's extremely difficult to evaluate Alabama quarterbacks, but Jones tossed 41 touchdowns in his junior season and could potentially solve the problem that Washington has had at the position for most of the last few decades. 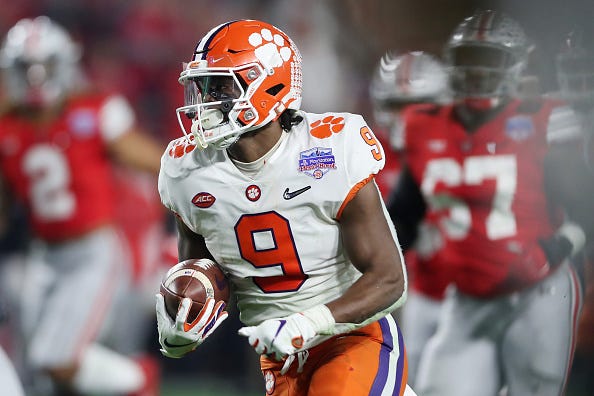 Travis Etienne is the top running back in this year's class. Photo credit (Matthew Stockman/Getty Images)

In four seasons at Clemson, Travis Etienne ran for nearly 5,000 yards. Had he come out last year, he may very well have been the top running back selected. He'll almost certainly have that distinction in this year's class, though it will be interesting to see how highly he's selected.

Either the Miami Dolphins or Arizona Cardinals could use their first-round pick on Etienne, but if not, he could very well drop. Chances are, none of the Washington Football Team, Chicago Bears, Indianapolis Colts or Tennessee Titans are going to use a first-round selection on a running back. The Steelers have a need at the position, though it's fair to wonder if they'd go in that direction as opposed to retooling their offensive line. We know after the success that undrafted rookie James Robinson had in his rookie season, the Jaguars are unlikely to use the No. 25 pick on a running back.

So that makes the Jets the team to watch for Etienne. If the Jets don't select the Clemson legend, it could mean he falls all the way to the Buffalo Bills at pick No. 30. For now, we'll say the Jets take Etienne with their second pick in the first round. Although considering new offensive coordinator Mike LaFleur comes from the Kyle Shanahan tree, perhaps they won't want to use such a high selection on a running back. 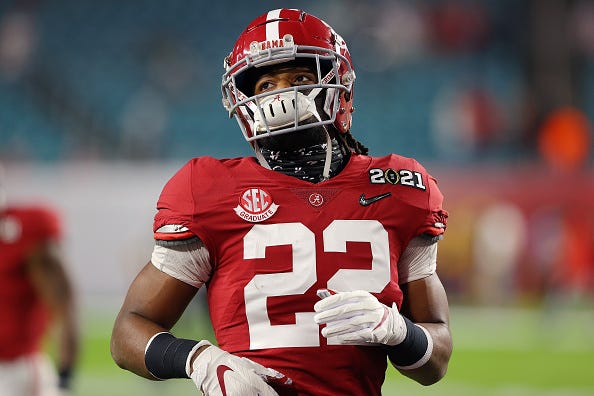 Bills Select Running Back Who Could Put Them Over the Top

The Bills used a third-round pick on Devin Singletary in 2019 and a second-round pick on Zack Moss in the 2020 NFL Draft, and still don't appear to have the running back position figured out. Josh Allen was the team's leading rusher in two of the Bills' three playoff games, with rushers other than the star quarterback combining for just 112 rushing yards over the same span.

Enter, Najee Harris, who averaged 6.0 yards per carry in his collegiate career, while accumulating plenty of big-game experience at Alabama. The Kansas City Chiefs are going to enter 2021 as the favorites to win the AFC, but with the addition of Harris, the Bills may be better equipped to push Patrick Mahomes and company.