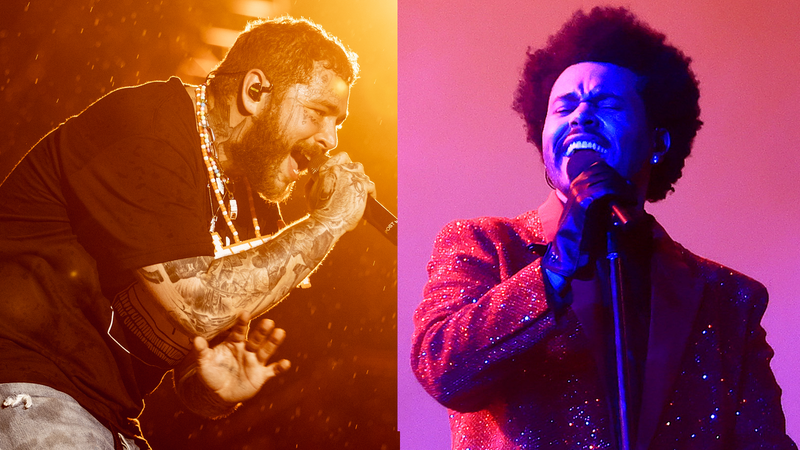 As both Post Malone and The Weeknd get ready to debut their new eras, they had the brilliant idea of merging their musical genius ways on a track. And as it seems, the collab is headed our way, and soon.

On Tuesday November 3, both Posty and Weeknd teased a snippet of a new song on their respective Instagram pages, showcasing their voices over a synthy pop beat.

And while it’s hard to make out exactly what Posty is mumble singing, the "Save Your Tears" singer comes in loud and clear on the following verse with lyrics, "You're a stain on my legacy."

Despite the assuring tease, at the time, both the song's title and release date we’re yet confirmed. That is until this week, when Post’s manager, Dre London, confirmed the bop was headed our way, providing its title and that both the track and a music video, which he called a "crazy movie," would be dropping next week.

"What I couldn’t wait to tell the🌎This Friday!! I’m excited for u to finally here what I been talking about!! @postmalone & @theweeknd ‘One Right Now’ 🔥🔥🔥 #DreVision in full effect!! #Shutdown Ting!!! Crazy Movie🎥 Video comes next week!!!"

When it drops, "One Right Now" will be Malone’s second single of 2021, following the July release of "Motley Crew." It will also mark the first time that The Weeknd and Malone have featured on a track together. As for The Weeknd, aside from the the current calculated and lengthy roll out of his follow up to After Hours (which is btw officially "complete"), he recently collaborated with EDM supergroup, and Audacy Beach Festival headliner Swedish House Mafia on "Moth to a Flame."

We don't have that much longer to wait until the track drops, but for now listen to the first official snippet of "One Right Now" above.