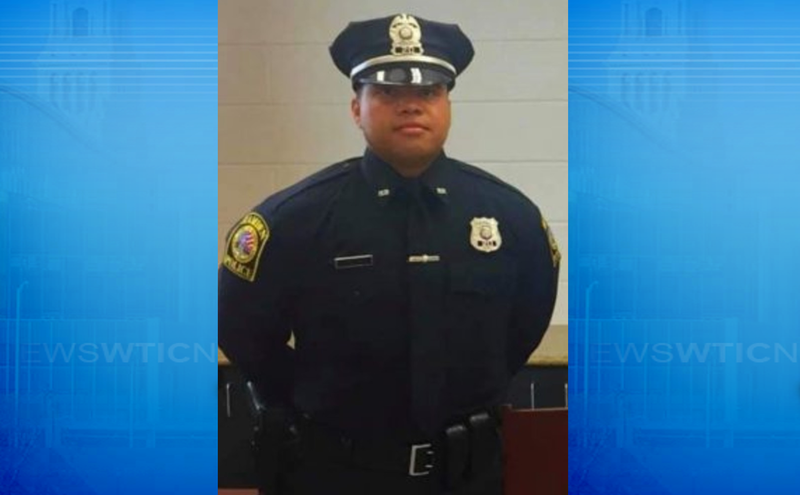 HAMDEN, Conn. (AP) - A Connecticut police officer who fired his gun 13 times at an unarmed couple's car and wounded a woman and another officer in 2019 pleaded no contest Thursday to felony assault and faces up to 18 months in prison under an agreement with prosecutors.

Hamden Officer Devin Eaton, 32, entered the written plea during an appearance in New Haven Superior Court in connection with the shooting of the woman. He also agreed to never again seek employment as a police officer in the United States.

He remains on unpaid administrative leave, with the police union's legal challenge to the town's proposed firing of him still pending. Hamden officials were told by the police union Thursday that Eaton is expected to resign by late Friday afternoon, according to the mayor's office.

Sentencing is scheduled for April 8. Although Eaton agreed to serve up to 18 months in prison, he will be allowed to argue for little or no time behind bars.

Eaton and his lawyer, Gregory Cerritelli, declined to comment after leaving the courthouse.

The shooting in New Haven on April 16, 2019, sparked several protests and calls for police officials to fire Eaton, who told authorities he believed the driver of the car had a gun. No weapons were found in the vehicle, and a prosecutor determined his use of deadly force was not justified.

The driver, Paul Witherspoon III, was not injured, but his girlfriend, Stephanie Washington, then 22, suffered serious injuries including a fractured pelvis and spine. Washington sued Eaton in a federal lawsuit that remains pending.

Eaton stopped the couple's car in New Haven because it matched the description of a car linked to a reported attempted armed robbery in Hamden, police said. A gas station clerk had called in the attempted armed robbery but later told police he hadn't see a gun, and surveillance video shows Witherspoon appearing to argue with another man but not robbing him.

Eaton's body camera video shows Witherspoon starting to exit the car and appearing to raise his hands when Eaton begins shooting. Witherspoon then quickly gets back into the vehicle.

A Yale University officer, Terrance Pollock, responded to the traffic stop and fired his gun three times at the car. But New Haven State's Attorney Patrick Griffin said in his investigative report of the shooting that Pollock was justified because he believed Eaton and Witherspoon were exchanging gunfire.

Pollock suffered a graze wound from a bullet fired by Eaton, officials said.