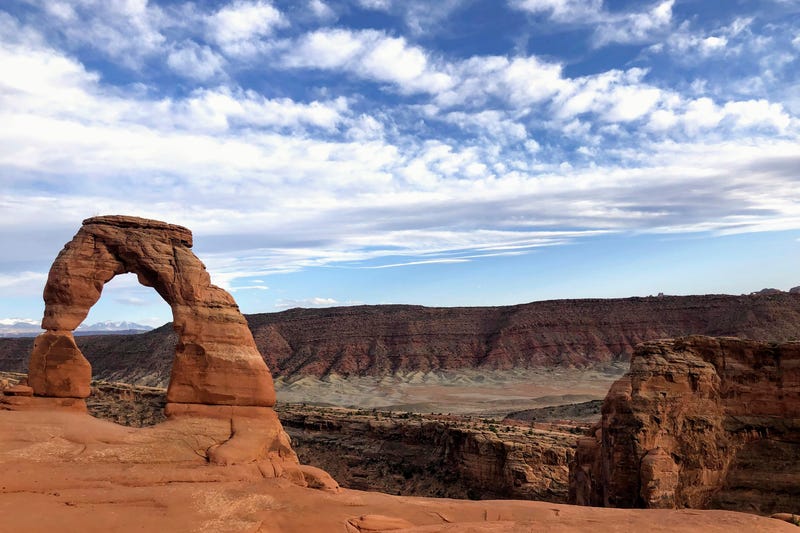 SALT LAKE CITY (AP) — Ludovic Michaud was driving around the scenic red rock landscapes of Utah's Arches National Park on a windy spring day in 2020 when something unthinkable happened: A metal gate whipped around, sliced through the passenger door of his car and decapitated his new 25-year-old wife, Esther Nakajjigo.

The tragic accident is now the subject of a wrongful death lawsuit Michaud and Nakajjigo's family are pursuing, in which they argue that the U.S. Park Service was negligent and did not maintain the gates at the entrances and exits to the parks, leading to Nakajjigo's death.

In opening statements Monday in Salt Lake City, attorneys representing Michaud and Nakajjigo's family said they were seeking $140 million in damages from the government.

The family's lawsuit claims when the national parks reopened in April 2020 after being shuttered due to COVID-19, rangers at the national park in Utah didn't secure the gate in place, which in effect “turned a metal pipe into a spear that went straight through the side of a car, decapitating and killing Esther Nakajjigo.”

United States attorneys do not dispute that park officials shouldered blame, but argued the amount the family should be awarded is far less and called into questions the ways in which the damages being sought were calculated. They said claims by the family’s lawyers that Nakajjigo, who was 25 at the time of her death, was on track to be a non-profit CEO shortly were too speculative to be used as a basis for damages.

“We don’t know with any level of certainty what her plans were,” Assistant U.S. Attorney Jeffrey Nelson said.

Attorney Randi McGinn, representing Nakajjigo's family, on Monday described the death in gruesome detail. After requesting that the family leave the courtroom, she recounted the moment Michaud realized his wife had been killed, when he inhaled the copper-tinged smell of blood, turned to figure out what it was and saw she was dead.

Opening statements previewed how the trial will hinge less on varying accounts of the accident and instead focus on Nakajiigo's biography and earning potential, which is used to calculate a portion of the damages. McGinn said if her life hadn't been cut short that Nakajjigo's trajectory suggested she would have gone on to become a non-profit CEO who could eventually have netted an annual income in the hundreds of thousands of dollars — or millions.

She described Nakajjigo as a prominent women's rights activist who rose from poverty to become the host of a solutions-oriented reality television series in Uganda focused on empowering women on issues such as education and healthcare.

Nakajjigo worked on fundraising to open a hospital in an underserved part of Kampala, Uganda's capital, became a philanthropic celebrity and immigrated to the United States for a fellowship at the Boulder, Colorado-based Watson Institute for emerging leaders.

Nelson, the government's attorney, said an appropriate award would be $3.5 million, far less than the $140 million being pursued. He said he didn't deny Nakajjigo was an extraordinary person, but argued it was difficult to speculate what kind of work she would have gone on to do. He noted she had recently worked as a host at a restaurant around the time of her death and didn't have a Bachelor's degree.

Arches National Park is a 120-square-mile (310-square-kilometer) desert landscape near Moab, Utah, that is visited by more than 1.5 million people annually. It's known for a series of sculpture-like fins and arches made of an orange sandstone that wind and water have eroded for centuries.