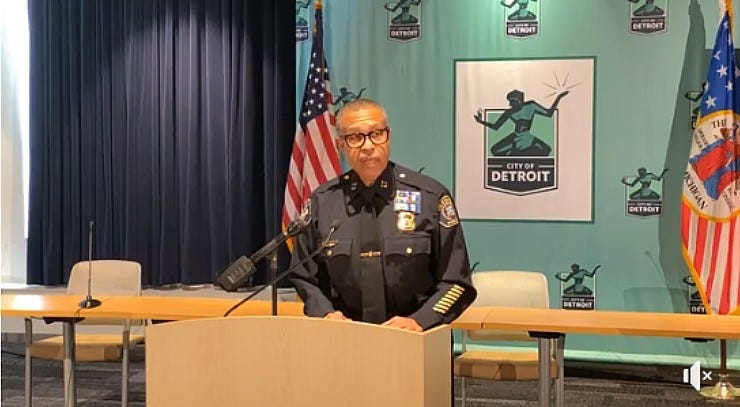 (WWJ) Detroit's police chief is reporting a violent weekend in the city, with more than two-dozen people shot.

Speaking to reporters Monday afternoon, Detroit Police Chief James Craig said there were 18 separate shooting scenes over Father's Day weekend, with a total of 29 victims — four of which were killed.

Five of the incident were double-shootings, Craig said. One was a triple shooting, and in another incident Craig describes as a "mass shooting," five people were shot.

While Craig lamented the violence, he did not sound at all surprised by it.

"I know that we've seen news reports about the increase in violent crime all over the country, and certainly we were not different," Craig said, at a news conference. "We recognize there has been tremendous tension with this city as well as others, starting with COVID," Craig said. "And, as everyone knows, we went right from COVID to protests that started out violent."

"We predicted early on — and this was certainly pre-Floyd," the chief said, referencing the killing of George Floyd by police in Minneapolis, "that because of the COVID and certainly the stay-at-home, that there would be tremendous tension, tremendous stress."

Four of the weekend shootings, Craig said, took place at house parties or block parties where disputes led to gunfire.

"What we're seeing is these argument-based senseless shootings among people who are acquainted, who are attending block parties," Craig said. "And so it's gotta stop."

In one incident Craig called "tragic and senseless," a man and his two young children were shot and wounded while setting off fireworks, on Plainview near Evergreen and 7 Mile Rd., Sunday night.

There had been no arrests in that case, as of Monday afternoon.

"This is still — it hasn't even been 24 hours — a very active investigation," Craig said. "We've gotten tips, we're looking very closely and we've kind of got an understanding of what may have transpired."

Detroit Mayor Mike Duggan said last week that police officers were being moved from posts at downtown protests back into the neighborhoods where community groups are worried about the spike in crime.

The mayor said, by last week, shootings had reached "levels we haven't seen in five or six years."

MORE: Man And His Two Kids Shot While Lighting Fireworks In Detroit