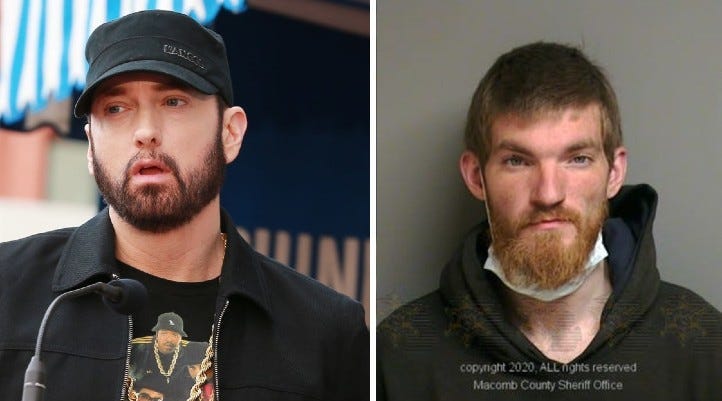 (WWJ/AP) A man who broke into Eminem’s Macomb County home in April told the rapper that “he was there to kill him,” a police officer testified Wednesday.

A judge found enough evidence to send Matthew David Hughes to trial on charges of home invasion and malicious destruction of property.

Hughes wasn’t armed when he was discovered in Eminem’s home in a gated community in Clinton Township.

Eminem, whose real name is Marshall Mathers, was sleeping at the time of the break-in — at around 4 a.m. — and initially thought the intruder was his nephew.

Hughes, who had allegedly used a brick to smashing through a kitchen window, and was struggling with a security guard when Eminem woke up.

“When Mr. Mathers asked him why he was there, he was told by Mr. Hughes that he was there to kill him,” Officer Adam Hackstock told Judge Jacob Femminineo Jr.

Eminem escorted Hughes out of the house, and Hughes was taken into custody at the scene. He was booked in the Macomb County Jail on charges of first-degree home invasion and malicious destruction of a building, which are both felonies.

“In my opinion, I think there’s some sort of mental issues involved here,” defense attorney Paul Glanda said outside court, referring to Hughes.

Eminem did not attend the court hearing.

Reports say Hughes was also arrested in June of last year for breaking into a Rochester Hills home that was previously owned by Eminem.