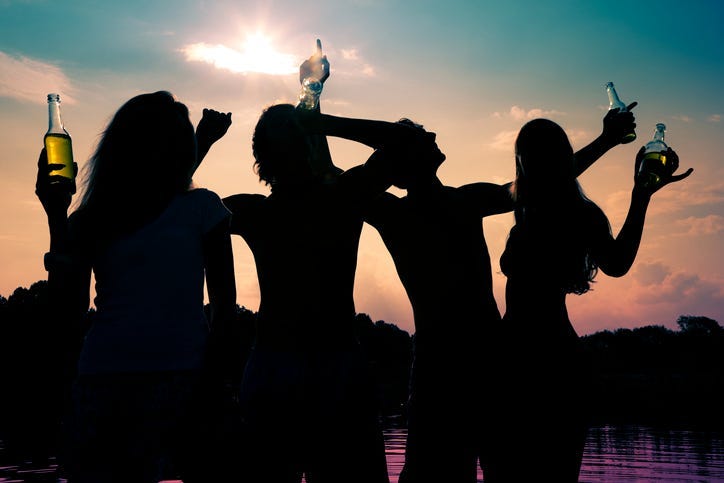 (WWJ) "Looks like a recipe for disaster," reads a tweet, which now been viewed more than 10.5 million times.

Video of a packed lake party in southwest Michigan has gone viral amid the COVID-19 pandemic.

Here’s the scene at Diamond Lake in Cass County, Michigan today. Looks like a recipe for disaster...🤦🏽‍♂️ #COVID19 pic.twitter.com/0OfgCXThQw

Reports say the footage — showing what looks to be several hundred young people, cramped together in the water — was shot on Saturday, the 4th of July at the Sandbar in Cass County's Diamond Lake, near the village of Cassopolis.

Social distancing did not appear to be top of mind. All in the crowd are clad in bathing suits, without masks; many bumping up against one another. "You guys are amazing out there!" shouts a man with a microphone as loud music plays, people drink, dance, and toss a beach ball around.

This comes as health officials are worried about an uptick in COVID-19 cases in Michigan, especially among young people.

Max Lewis of TV station WSBT said he spoke with both the health department and one of the party's organizers. "The health department said seeing the video was concerning," Lewis tweeted. "The organizer said people like their freedoms and he doesn't think anyone will get sick."

This isn't the first such event in the state in recent days.

On June 26, the annual Jobbie Nooner, touted as "the Mardi Gras of the Midwest," took place as scheduled, and as usual at Lake St. Clair's Gull Island.

WWJ's Tim Skubick reported there was a similar bash at the Torch Lake Sandbar where boaters gathered for a party Saturday. "Many ignored the governor's order to keep their gatherings under 100, and ignored her advice to mask up," Skubick said.

Just ahead of the holiday weekend, Gov. Gretchen Whitmer shut down indoor service at Michigan bars over concerns about outbreaks linked to bar crowds; including Harper's in East Lansing.

"The governor closed the bars for the holiday weekend but not the beaches. Will the beaches be next?" Skubick asked on WWJ Monday morning. "We'll know in two weeks if there was any spread as revelers enjoyed the heatwave while ignoring the next possible virus wave."

After a day with no new deaths on Sunday, Michigan Department of Health and Human Services reported 297 new cases of COVID-19 and 3 new deaths in the state on Monday. That brings the totals to 66,173 cases and 5,975 deaths. (Get more statistics from the state at this link).

While Whitmer did not immediately comment on weekend's events, she did warn last week that she may have to roll Michigan back to Phase 3 of her reopening plan if cases continue to increase.

She continues to stress mask wearing and social distancing as a strategy to slow to spread of the virus.

Reminder: We are in the middle of a global pandemic. If we are careless, Michigan could suffer the same fate. Our frontliners put their lives on the line, and we owe it to them to do everything in our power to ensure they do not face impossible choices like this. https://t.co/ajmWe70HY1

The governor on Monday tweeted a video of a doctor lamenting limited space at a Texas hospital, along with the message: "Reminder: We are in the middle of a global pandemic. If we are careless, Michigan could suffer the same fate. Our frontliners put their lives on the line, and we owe it to them to do everything in our power to ensure they do not face impossible choices like this."