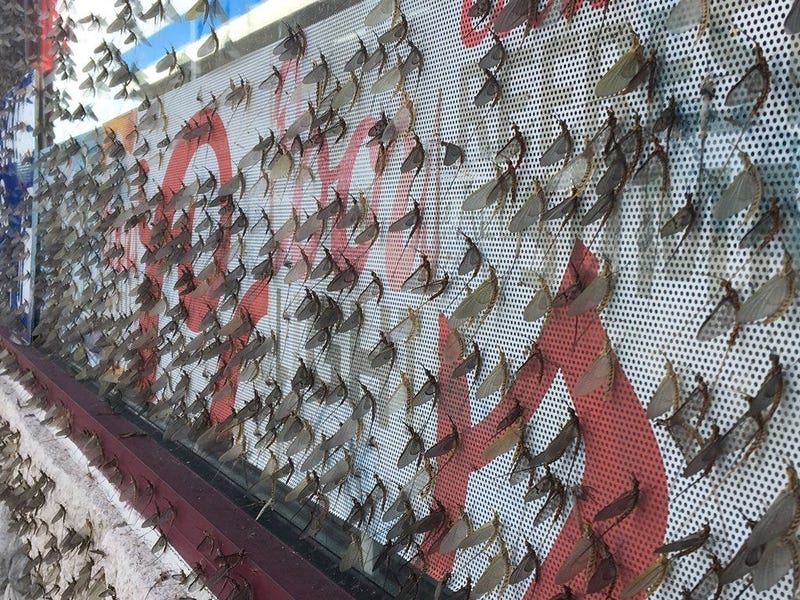 Weather radar from early this month showing the ascent and downwind drift of several billion fishflies over western Lake Erie has gone viral.

While the annual influx of bugs is nothing new, the sheer size of the hatch is an astonishing sight from this angle.

"We can see that sometimes. It can be birds, it can be bats, it can be flies; they will show up sometimes on weather radar," said AccuWeather Meterologist Brian Thompson, speaking live on WWJ Newsradio 950 Thursday.

Thompson said these massive hatches been spotted on radar over Lake St. Clair as well. "So we're seeing this really in the last week or so."

Yes. That is billion with a "b". pic.twitter.com/DcYxwGBRlA

"Every year they're here and then they're gone," he told WWJ's Mike Campbell. "One thing: they don't bite and they don't mess with my garden."

Crunching dead bugs underfoot at she entered a 7-Eleven on Jefferson Ave., St. Clair Shores resident Katie White said, "It doesn't bother me too much. I think it's been worse in the past."

Fish Flies favor 7-Eleven, it seems. A manager took pictures of the annual invasion at the St Clair Shores store on Jefferson btwn 10- and 11-Mile. He uses a yard blower to clear them outside, and a vacuum inside to suck them off the ceiling and from inside the coolers. @WWJ950 pic.twitter.com/HQuoMPZKPk

Campbell reported sign on the store was covered in fishflies. "Even the inside of the store has fishflies on the lights and in some coolers," Campbell said. "It's kind of creepy, but Tavier the manager there says hey, you just deal with it. He deals with it with a vacuum, sucking them from the ceiling."

Meanwhile, social media continues to flood with photos of the bugs, both dead and alive, blanketing everything from walls and windows to cars and the ground itself in Michigan and Ohio. Here are a few, if you can stand to look.

It’s fishfly season. This is what we deal with for a month each year. I use my umbrella as a shield. #nature #bugs pic.twitter.com/T8cNUoKOJo

On today’s adventure in MI I met mayflies 🤢🤮 pic.twitter.com/omibHnMjfA

Oh my goodness! Glad to know our water must be really clean! Mayflies, June Bugs, Fishflies...whatever they are, it was nice while they stayed away! A new mascot for the @ForestGladeBL? Forest Glade Fishflies?!? pic.twitter.com/oCxV0o7SzV