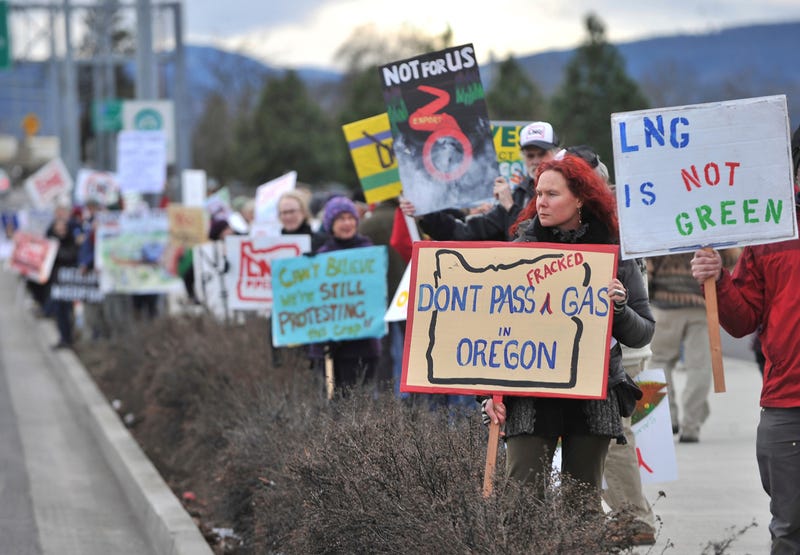 Opponents of the Jordan Cove project, which would have created the first liquefied natural gas export terminal on the West Coast in the lower 48 states, rejoiced at the news. The marine export terminal would have been located at Coos Bay, with a 230-mile (370-kilometer) feeder pipeline crossing southern Oregon.

Many landowners, Indian tribes and environmentalists had objected, saying the project by Calgary-based Pembina Pipeline Corp. could spoil the environment and would have contributed to global warming by producing greenhouse gases. In 2019, protesters filled the Oregon State Capitol and occupied the governor's office until they were hauled away by state police.

"It’s been almost two decades of fighting this project, and it is incredible to hear that all of that work has paid off and our homes, our waterways, our climate are going to be protected from this project,” said Allie Rosenbluth of Rogue Climate, a southern Oregon-based group advocating for a transition to renewable energy.

Supporters of the project to ship U.S. and Canadian natural gas to Asia said it would create jobs and help the economy. The Coos Bay City Council last year approved dredging part of the bay to increase the width and depth of the shipping channel.

The Federal Energy Regulatory Commission approved the project in March 2020, during the Trump administration. Oregon's Democratic Gov. Kate Brown threatened to go to court to stop the project if it didn't obtain every permit required from state and local agencies.

The Oregon Department of Environmental Quality denied a water quality certification for the project, and the Department of State Lands refused to grant another extension to Pembina to file documents in its application for a permit to dredge sediment out of Coos Bay.

Pembina said Wednesday that federal regulators took another look this year, and on Jan. 19, the commission determined Oregon had not waived its certification authority under the Clean Water Act. Furthermore, on Feb. 8, the U.S. Department of Commerce sustained Oregon’s objection under the Coastal Zone Management Act.

Donald Sullivan, manager and associate general counsel of the project, told the commission in a notification Wednesday that the company has reviewed the prospects for obtaining the permits in the future and “decided not to move forward with the project.”

Sullivan's notification asked the commission to cancel its permit.

Deb Evans, who owns land in rural southern Oregon’s Klamath County that the pipeline would have crossed, said, “It's a good day for landowners.”

She and her family have been fighting the project for years, fearing the loss of part of their wooded property, where they have a timber mill, to eminent domain.

“We’re super pumped about the news that we got today from our attorneys, and it’s been a long time coming,” Evans said. She was worried about fire danger from the pipeline which would have crossed almost a half-mile of their property. She also cited risks to the environment.

Chairman Don Gentry of the Klamath Tribes said the decision by Pembina to drop the project “is a significant relief for our members who have been so concerned about the impacts.”