(WWJ) “This kind of money will impact the families of our club members for generations to come," one of the four luck winners said.

An Oakland County lottery club has claimed what officials say is the largest prize in Michigan Lottery history: a $1.05 billion Mega Millions jackpot.

“A club member saw a sign that the jackpot was up to $1 billion and remembered that they hadn’t bought their tickets yet, so they pulled into the Kroger,” said the club’s representative and attorney, Kurt D. Panouses, esq. “When you play of course you dream of winning, but the reality of it has been incredible."

He added: "We plan to stay humble and pay it forward through charitable giving in southeast Michigan.”

The club opted to receive their prize as a one-time lump sum payment of about $776 million, instead of annuity payments for the full amount. After required income tax withholdings of 24% federal tax (about $186 million) and 4.25% state tax (about $33 million), the club received about $557 million.

For selling the winning ticket, Kroger received a $50,000 bonus commission. Shortly after the prize was won, the store announced it would donate the $50,000 to the Food Bank Council of Michigan.

“Kroger is committed to our mission of feeding our communities,” said Rachel Hurst, Corporate Affairs Manager for Kroger in Michigan. “Strong partnerships with both the state of Michigan and the Food Bank Council of Michigan are integral in driving our mission forward.” 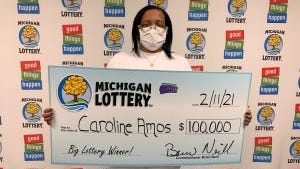 Lottery officials say sales during the record-setting jackpot run, which began in late September, helped kickstart the Lottery’s 2021 fiscal year. From the start of the fiscal year in October through the end of the jackpot run, Mega Millions sales were up about 110% compared to the same period in 2020.

The $1.05 billion jackpot is the largest prize ever won in Michigan, and third-largest prize won in the U.S. The national and world record for a Powerball lottery jackpot is $1.586 billion, won on Jan. 13, 2016, and split between three winning tickets in California, Florida and Tennessee.

Previously, the largest Lottery prize ever won by a Michigan player was a $337 million Powerball jackpot won on Aug. 15, 2012.

Mega Millions drawings take place each Tuesday and Friday evening, with tickets sold online at MichiganLottery.com and at the Lottery’s 10,500 retailers statewide until 10:45 p.m. the day of the drawing.

Remember, never gamble more than you can afford to lose. Facing a gambling problem can be overwhelming, and people who get in too deep can feel like there is no way out. If you need help, call the Michigan Problem Gambling Helpline at 1-800-270-7117.