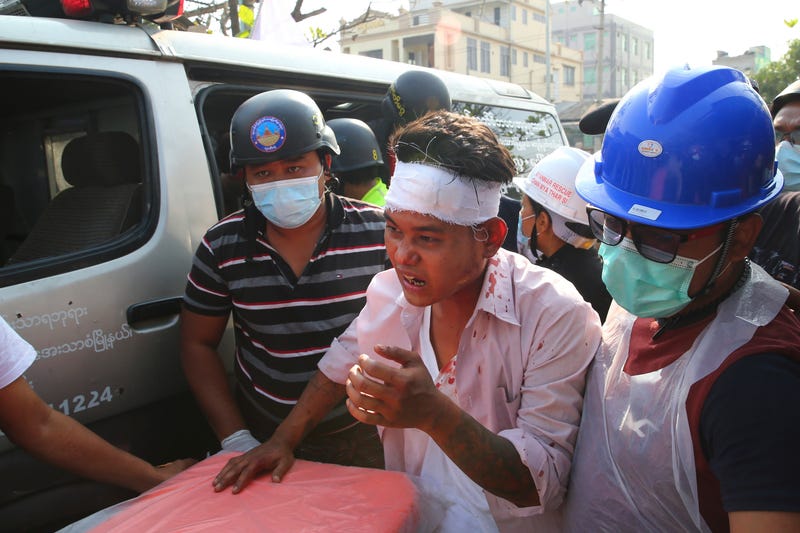 TOKYO (AP) — Myanmar's security forces have killed scores of demonstrators protesting a coup. The new junta has jailed journalists — and anyone else capable of exposing the violence. It has done away with even limited legal protections. The outside world has responded so far with tough words, a smattering of sanctions and little else.

The slide from a nascent democracy to yet another coup, as rapid as it has been brutal, opens up a grim possibility: As bad as it looks in Myanmar now, if the country’s long history of violent military rule is any guide, things could get worse.

Protesters have continued to fill the streets despite violence that left 38 people dead one day this week — though they have turned out in smaller numbers than the weeks right after the Feb. 1 coup. They have used smartphones to capture the brutality. Recent videos show security forces shooting a person at point-blank range and chasing down and savagely beating demonstrators.

The military, however, has the clear upper hand, with sophisticated weapons, a large network of spies, the ability to cut telecoms, and decades of fighting experience from civil conflicts in the country’s borderlands.

“We are at a crisis point,” Bill Richardson, a former U.S. ambassador to the United Nations with long experience working with Myanmar, told The Associated Press, pointing to the arrests of journalists, including AP's Thein Zaw, and the indiscriminate killing of protesters. “The international community needs to respond much more forcefully, or this situation will degenerate into complete anarchy and violence.”

Governments around the world, including the United States, have condemned the coup, which reversed years of slow progress toward democracy. Before that opening up began, Myanmar had languished under a strict military rule for five decades that led to international isolation and crippling sanctions. As the generals loosened their grip in the past decade, the international community lifted most sanctions and poured in investment.

Despite the flurry of recent global criticism, however, there's not much hope that pressure from outside will change the course of events inside the country. For one thing, coordinated action at the U.N. — like a global arms embargo that the world body's independent expert on human rights in Myanmar, Tom Andrews, called for — is unlikely. Russia and China, Myanmar’s most powerful supporter, are still selling arms to the military — and they each have a permanent seat on the U.N. Security Council and thus could veto any such measure. The Security Council will take up the crisis in Myanmar on Friday.

Myanmar's neighbors, the countries that make up the Association of Southeast Asian Nations, are generally loath to “interfere” in one another's affairs — a policy that means they are unlikely to do anything more than call for talks between the junta and the ousted government of Aung San Suu Kyi.

That leaves sanctions from the United States and other Western countries. Washington imposed sanctions on Myanmar’s top military leaders after the Feb. 1 coup. More pressure came after a U.N. envoy said security forces killed 38 people on Wednesday. Britain imposed sanctions on three generals and six members of the junta in response to the coup and the crackdown. The European Union is drawing up measures to respond to the coup.

But even tough sanctions from those countries are unlikely to yield anything, though they may weigh heavily on ordinary people. Myanmar has ridden out decades of such measures before, and the military is already talking about plans for “self-reliance.”

U.N. special envoy for Myanmar, Christine Schraner Burgener, told reporters this week that she had warned the military that tough sanctions may be coming — and the response was that the generals knew how to “walk with only a few friends.’”

“Myanmar’s history suggests the military will use ever increasing brutality and violence in an attempt to put down the protest movement,” said Ronan Lee, a visiting scholar at the International State Crime Initiative at Queen Mary University of London. “In the past, the military has been prepared to murder thousands to quell civil unrest or to meet its goals.”

In the face of such determination, some observers question how long the protest movement can last.

“While it may appear at first glance to be a battle of wills, the military has a substantial resource advantage over the average protester and has demonstrated that it’s willing to engage in extreme acts of violence and brutality to try to force compliance,” said John Lichtefeld, vice president of The Asia Group, a consulting firm.

It may get much worse, he said. The military “is an organization with tremendous institutional pride, and it’s possible that hardliners within the military who have been pushing for a more aggressive response are beginning to gain influence.”

The military has also gotten away with past abuse. In 2017 the army slaughtered thousands of minority Rohingya Muslims in massacres that U.N. officials have said bear the “hallmarks of genocide” with few consequences so far.

In a sign of how limited the options are to influence the junta, when asked what more Britain and other countries could do, Foreign Secretary Dominic Raab responded: “We will continue to look at how we hold individual members of the regime to account.”

Myanmar’s military is banking on the world going no further than “harsh words, some economic sanctions and travel bans,” Lee, the scholar at Queen Mary University, said. In order to ensure that, it may exercise some restraint in its crackdown — to try to keep violence below a threshold that would compel action — or at least keep it hidden.

This is why, he said, authorities are targeting journalists. It suggests they “understand the value of international exposure to the protesters and are aggressively working to limit it.”