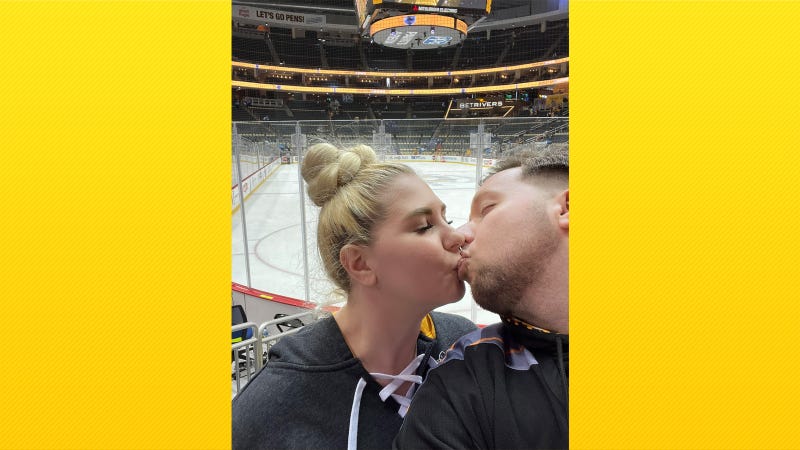 One of the biggest stories to come out of PPG Paints Arena on Saturday, besides a huge win for the Penguins, was the rejected kiss caught on camera.

A Pens fan in a classic Mario Lemieux jersey went to kiss a woman after Danton Heinen scored in the third period to give the Pens the lead.

But the woman, with a gold rally towel in her hand, pushed the man away and appeared to say “no” as a smile developed on her face.

The moment quickly turned into a gif and was picked up by national outlets like Barstool and even Primanti's reached out to help a brother out.

She said absolutely not pal pic.twitter.com/UEP9UT8QBM

Anyone know this dude? We’ve got a nice pastrami sandwich ready that he can lay his lips on any time. https://t.co/vuL13uHvpU

That man who was seemingly rejected is sharing the real story with 93.7 The Fan.

Matt McHugh says he and his girlfriend Jacquelyn have been together for eight and a half years and plan to spend the rest of their lives together.

McHugh says they were seated right next to the television camera men and he noticed that after each Penguins goal, a camera guy would spin around to get crowd reaction.

After Heinen scored the game-winning goal, McHugh and his girlfriend jumped out of their seats and kissed in celebration, but that was missed by the camera man.

“Literally 3 seconds after the initial kiss I saw one of the TV camera men spin around towards us and I thought “Here is our opportunity to showcase our love for the Pens and each other with another kiss!” She clearly did not see the camera man and thought I was randomly going in for another kiss and the rest is history,” said McHugh.

The moment seen by everyone was basically a “I already get you a kiss” moment.

A sales rep at Renewal by Andersen, McHugh says he’s been getting razzed from his coworkers.

“They know Jacquelyn very well and have been cheering her on for turning me down lol,” said McHugh who has been taking the viral incident in stride.

What seemed like a rejected love, in reality, is a love story that’s been going on for nearly a decade.