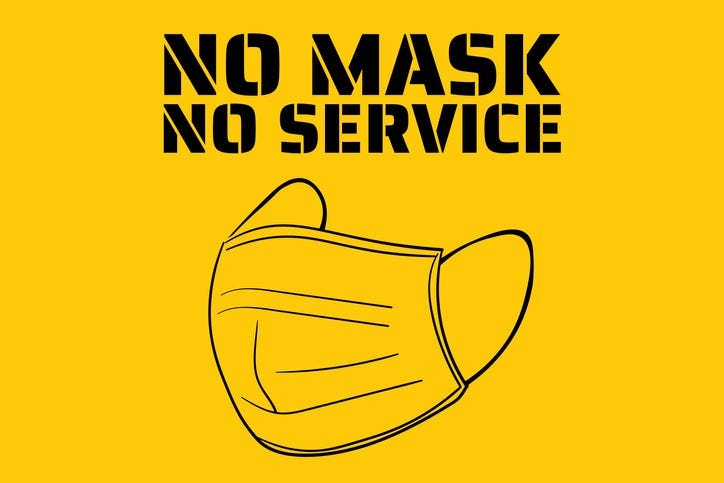 A Minnesota couple wearing masks with swastikas went viral after being confronted by shoppers at a Walmart in Marshall, Minnesota, with the video reaching over 3.2 million views by yesterday morning.

The couple wore the Nazi masks as a protest of the state-issued mask mandate - which many have argued is unconstitutional.

During much of the pandemic - President Trump accused mask wearers of being “politically correct” and even said that Americans who are wearing masks are doing so as an act of defiance against his presidency. That’s why it was surprising President Trump very recently equated wearing a mask with patriotism.

Police responded to the disturbance, and a 59-year-old man and 64-year-old woman were served with a trespassing notice and warning and left without incident.

Raphaela Mueller, 24, took the video that went viral and told CNN she was “completely shocked.” She said the swastika is “a sign of death, persecution, a lack of diversity” and said she felt a range of emotions from disappointment to pain to anger.

"What happened at our store in Marshall, MN is unacceptable. We strive to provide a safe and comfortable shopping environment for all our customers and will not tolerate any form of discrimination or harassment in any aspect of our business. We are asking everyone to wear face coverings when they enter out stores for their safety and the safety of others and it’s unfortunate that some individuals have taken this pandemic as an opportunity to create a distressing situation for customers and associate in our store."

One shopper who confronted the couple told them “You’re sick, you have an illness. You can’t be American and wear that mask. We literally had a war about this.”

The woman wearing the Nazi mask responded to criticism from other shoppers by saying, “If you vote for Biden, you are going to be in Nazi Germany.”

We are less than 100 days from the 2020 presidential election. Let’s try to resist the temptation to accept the fear factor from either side as reality.