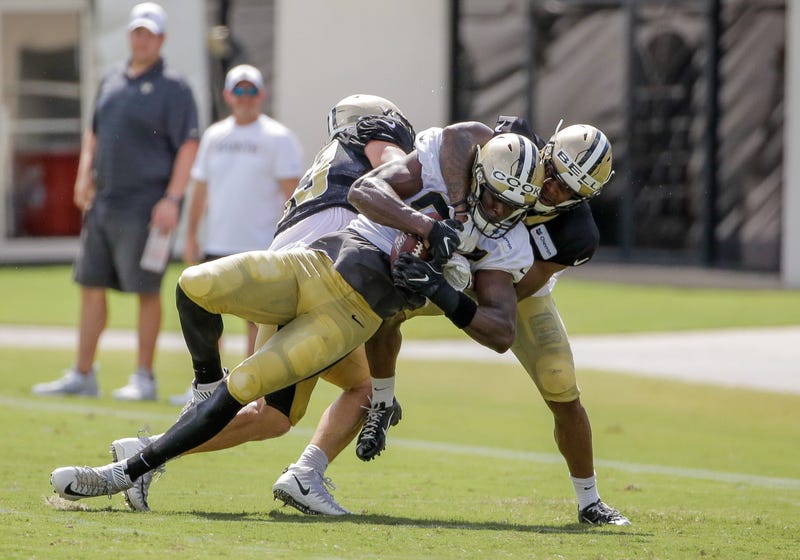 Saints add a new TE, Bell’s up & down day & Sherels in lead for punt return gig

Saints players had a rude welcome back to practice following a day off since there wasn’t much cloud cover from the grueling sun today. 8 players were not seen at Wednesday’s scorching session:

Also not present was offensive lineman Nate Wozniak.  He was waved to make room on the roster for tight end AJ Derby.  The new addition was a 6th round pick by the Patriots in 2016 and has also played for the Broncos and Dolphins. Derby has appeared in 25 games, making 40 catches for 452 yards and 4 touchdowns in his 4 year NFL career.

They say first impressions are everything, so I am sure AJ Derby would like a redo on his 1st day in Black & Gold.  QB Teddy Bridgewater threw him a pass that bounced right out of his hand and into rookie CJ Garnder-Johnson’s grasp.

Up & down day for Vonn Bell

The Saints safety started out with a great interception in one-on-one drills while covering WR Travin Dural. Teddy Bridgewater was at QB and lofted a ball down field that Bell tracked the whole way and finished by leaping in front of Dural to secure the ball.

But, later on Bell got abused by Drew Brees. First there was about a 25 yard gain to TE Josh Hill.

Then, it was Jared Cook cooking Bell on an over route for another long gain.

One of the low-key best signings in NFL free agency was the Saints brining in veteran Marcus Sherels, who specialized as both a kick and punt returner for 10 seasons with the Vikings.  He averaged 12 yards on 23 punt returns last season, and looks to be in the lead for the job this year in Black & Gold. So far this camp, Sherels has been 100% when fielding punts. Meaning, no bobbles or drops. He seems to have a knack for tracking the football’s flight pattern and does not misjudge kicks.