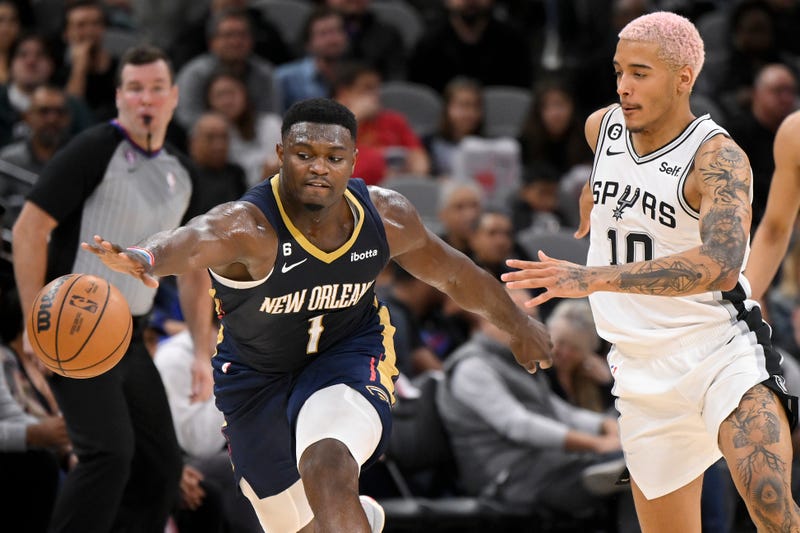 SAN ANTONIO (AP) — Zion Williamson had a season-high 32 points along with 11 rebounds and the New Orleans Pelicans never trailed while handing the San Antonio Spurs their sixth straight loss, 129-110 on Wednesday night.

Williamson was 14 for 18 from the field.

The Pelicans extended their lead to 24 points in the fourth quarter in winning for the seventh time in nine games.

San Antonio’s reserves went on an 11-0 run to cut New Orleans’ lead to 118-102 with 3:20 remaining, but the game was essentially decided in the opening minutes.

Jonas Valanciunas finished with 22 points and 10 rebounds for New Orleans.

The Spurs missed their first eight shots of the game as the Pelicans raced to a 21-6 lead. San Antonio would follow that by scoring four points in the first 4 1/2 minutes of the second quarter.

Williamson and Valanciunas dominated the paint early, combing to score 18 points on 7 for 9 shooting in the first 6 1/2 minutes of the game.

Pelicans: New Orleans trails its overall series with San Antonio 107-104. … Williamson flexed his right biceps as Jeremy Sochan tumbled to the court while failing to prevent a layup by the Pelicans’ 285-pound forward. San Antonio called a full timeout after the basket, which put New Orleans ahead 37-19 with 9:31 remaining in the first half. … Trey Murphy missed the game with a bruised right foot.

Spurs: San Antonio is 1-11 in November after opening the season 5-2. … The Spurs scored 47 points in the first half, their second lowest in the first half this season. … G Romeo Langford returned from a five-game absence while following the league’s health and safety protocols.

Pelicans: At Memphis on Friday night.

Spurs: Face the Los Angeles Lakers on Friday night in the first of a two-game home set.