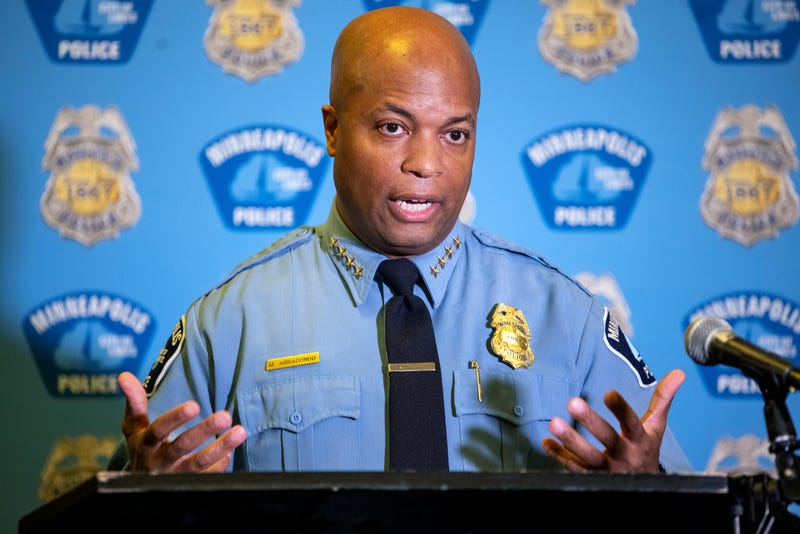 MINNEAPOLIS (AP) — Minneapolis Police Chief Medaria Arradondo announced Monday that he won't accept a third term as chief, a blow to a department that has been reeling since four officers were charged in George Floyd's death.

Arradondo, 54, said he would retire in January after 32 years at the department, calling it time for a new chief to lead.

“I believe that now is the right time to allow for new leadership, new perspective, new focus and new hope to lead the department forward in collaboration with our communities,” he said. “I am confident that the MPD has the leadership in place to advance this critically important work that lies ahead of us.”

Arradondo, the city's first Black police chief, was promoted in 2017 following the firing of his predecessor for her handling of the fatal police shooting of Justine Ruszczyk Damond, who had called 911 to report hearing a possible sexual assault near her home.

Arradondo, who first joined the department in 1989 as a patrol officer in north Minneapolis, was seen as an agent of change in a department that many described as discriminatory toward the city's people of color.

Following Floyd's death in May 2020 and the protests and unrest in the days after, Arradondo immediately fired the four officers involved. In the 18 months since then, he has weathered calls to dismantle the department, including a ballot initiative in November to replace the police department with a new department of public safety. About 56% of city residents voted against that initiative.

Arradondo said Floyd's death and the aftermath didn't affect his decision to retire. He also said he has no plans to pursue elected office or police jobs elsewhere.

The department has struggled with the same spiking crime seen in many major U.S. cities in the past 18 months, and has been doing so even as many officers leave. The department is as much as one-third below its authorized maximum size.

Arradondo and Frey have touted several policy changes as progress toward changing the department, including improving body camera compliance among officers and banning “warrior-style” training, chokeholds and pretext stops for some low-level offenses, among others.

Arradondo said Monday that he will be recommending potential successors from within the department to the mayor, though he declined to name specific candidates. Frey said he will announce an interim chief in the coming days before beginning a national search for Arradondo's successor.

“It is this legacy of leadership, this commitment to procedural justice, to safety in every single corner of our community, that will form not just Chief Arradondo’s legacy but also as a proper foundation for our next chief,” Frey said at the news conference.

Arradondo was a finalist in January to take over the San Jose, California, police department before he took himself out of the running. He said at the time that he was committed to overseeing the transformation of his own department.

Mohamed Ibrahim is a corps member for the Associated Press/Report for America Statehouse News Initiative. Report for America is a nonprofit national service program that places journalists in local newsrooms to report on undercovered issues.