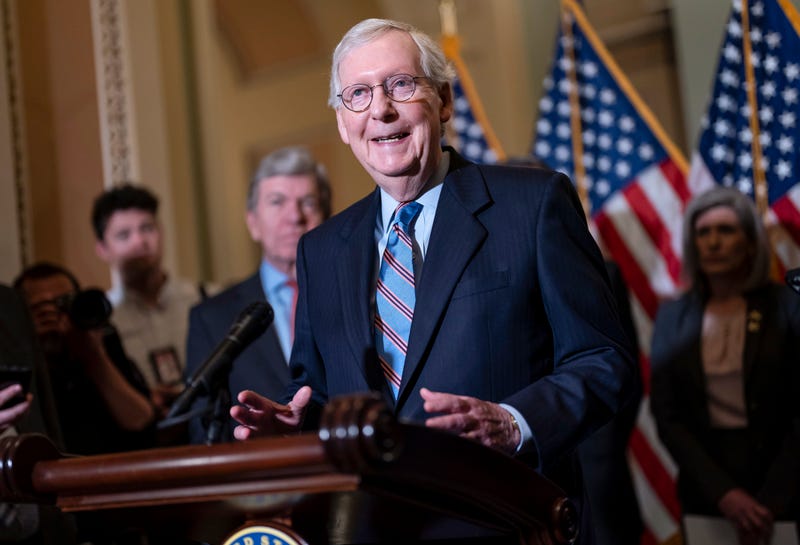 WASHINGTON (AP) — The end of Roe v. Wade started in the Senate.

It was the Senate Republican partnership with President Donald Trump to confirm conservative judges, and transform the federal judiciary, that paved the way for the Supreme Court's landmark ruling to overturn the constitutional right to abortion.

Senate Republican leader Mitch McConnell set the strategy in motion, engineering the Supreme Court's makeover by blocking President Barack Obama's 2016 nomination of then-Judge Merrick Garland and changing the Senate's rules to easily confirm Trump's picks. It was a long game that sought to lock in a conservative court majority for decades to come. Trump and McConnell, R-Ky., couldn't have accomplished it alone, needing the backing of almost all Republican senators to reshape the bench.

Now, Republicans are heading into a November midterm election that is poised to swiftly become a referendum on the court's decision to overturn Roe v. Wade, as voters decide which party should control Congress. With the nation polarized, Democrats are vowing legislation to protect abortion access and while Republicans want to impose further limits, including a nationwide ban on abortions.

“We are going to retake the Senate in November and we’re going to hold the Senate for a long time,“ predicted Sen. Josh Hawley, R-Mo., who celebrated the ruling on a conference call with reporters Friday.

The stakes are high with the control of Congress in the balance. With Biden's approval rating low and economic conditions grim with high gas prices and other signs of inflation, Republicans are favored to pick up seats in both chambers and regain control. Democrats have just a slim few-vote margin in the House and barely hold the evenly split 50-50 Senate because Vice President Kamala Harris casts a vote in case of a tie.

House Speaker Nancy Pelosi, D-Calif., warned that Republicans would be called to answer for their work and were planning even more draconian measures if they win control of Congress, including a nationwide ban on abortion.

“They cannot be allowed to do this,” Pelosi said. “Make no mistake: The rights of women and all Americans are on the ballot this November.”

Before Trump was elected the nation's abortion wars had settled into an uneasy truce in Congress. The court's decisions in Roe v. Wade and the subsequent Planned Parenthood v. Casey affirmed a constitutional right to abortion access. Legislation flared from time to time, but there were rarely solid majorities in the House and Senate to upend settled law.

But McConnell, R-Ky., set his plans for a conservative judiciary in motion early 2016, even before Trump became president. Knowing the power abortion and other issues held for conservative voters, he refused to consider Obama’s nominee to fill the court vacancy left by conservative Justice Antonin's Scalia's death that February. McConnell argued it was too close to the November election.

It was a stunning, calculating political move. McConnell dashed off his decision just before the Republican presidential candidates were about to take the stage for a debate heading into the South Carolina primary, setting the tone for the GOP.

Democrats, outraged, pushed ahead Obama's nomination of Garland only to have McConnell, as majority leader in the Senate, decline to take it up for consideration. Trump won the presidential election in November in part on the promise of filling the court vacancy with a conservative in the mold of the late Scalia.

The Trump era brought three new conservative justices — Neil Gorsuch, Brett Kavanaugh and Amy Coney Barrett. Each was confirmed under new rules McConnell orchestrated that lowered the threshold to a simple 51-vote majority, to push past a filibuster of opposition.

While Republican senators may have diverged with Trump on many issues, almost all Senate Republicans stuck with him on this one for the promise a conservative court majority could bring — not just on abortion, which some senators feel more strongly about than others, but the rash of other policy and regulatory issues.

No Democrats voted for Barrett, and of the three Democrats who voted for Gorsuch only Sen. Joe Manchin of West Virginia, remains in office. He also voted for Kavanaugh.

Manchin said he was “alarmed” at the abortion decision, having trusted Gorsuch and Kavanaugh when they testified under oath that Roe v. Wade was settled legal precedent.

The same disbelief was expressed by Sen. Susan Collins of Maine, who along Sen. Lisa Murkowski of Alaska are the two Republican senators who publicly support access to abortion.

“Every Republican Senator knew this would happen if they voted to confirm these radical justices,” said Senate Majority Leader Chuck Schumer, D-N.Y.

Collins appeared furious Friday, saying the ruling was “ill-considered” and “inconsistent” with what Gorsuch and Kavanaugh had told her in private meetings and their public testimony about the importance of supporting judicial precedents.

“Throwing out a precedent overnight that the country has relied upon for half a century is not conservative,” Collins said in a statement. “It is a sudden and radical jolt to the country that will lead to political chaos, anger, and a further loss of confidence in our government.”

Murkowski and Collins have introduced legislation that would begin to put the Roe v. Wade protections into law, an alternative to the Democrats' bill that already passed the House but has been blocked in the Senate as unduly expanding abortion rights.

The two Republican women said a legislative solution was paramount, and must be a priority, despite the unlikelihood of the House and Senate passing a bill.

“It is up to Congress to respond,” said Murkowski, who is up for reelection in the fall.

But Republicans are moving in the opposite direction, poised to enact further restrictions if they win control of Congress in fall.

Asked what types of abortion legislation Republicans would work to advance if they took over the House, GOP leader Kevin McCarthy, who is in line to replace Pelosi as speaker, said: “We will continue to look wherever we can go to save as many lives as possible.”

Congress is away for a two-week recess. Crowds have gathered outside the Supreme Court, across the street, since the abortion decision was released.

McConnell, who is not up for reelection this fall but hopes to win enough seats to again become the majority leader in the Senate, appeared pleased by the outcome of his many long years of work.

“Millions of Americans have spent half a century praying, marching, and working toward today’s historic victories," he said in a statement Friday. "I have been proud to stand with them throughout our long journey and I share their joy today.”

For AP’s full coverage of the Supreme Court ruling on abortion, go to https://apnews.com/hub/abortion