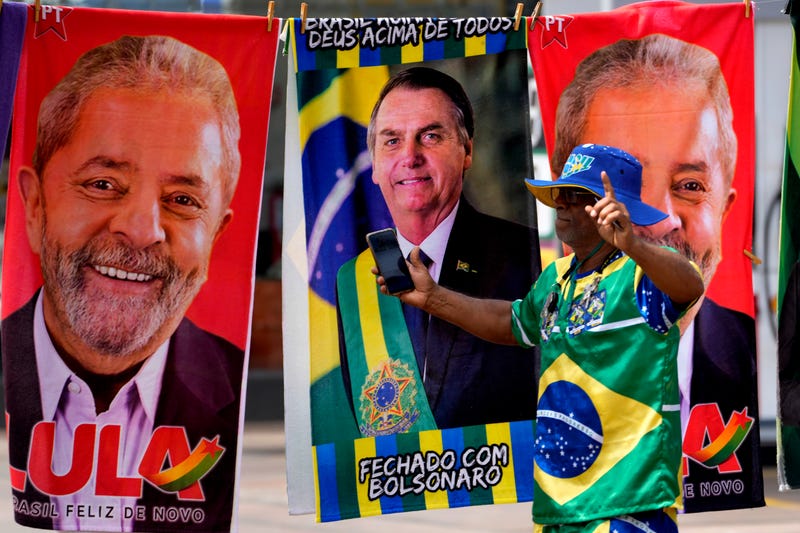 Both are political titans, and eight of 10 Brazilians will vote for one of them, according to pollster Datafolha. That leaves little space for challengers and means that in lieu of fresh proposals and detailed programs, the two frontrunners have mostly harped on their experience and railed against each other.

“Both candidates are very well known, the vote is very crystallized," said Nara Pavão, who teaches political science at the Federal University of Pernambuco, adding that most voters made up their minds long ago.

Sunday’s election could signal the return of the world’s fourth-largest democracy to a leftist government after four years of far-right politics led by a president criticized for challenging democratic institutions, his handling of the COVID-19 pandemic that killed nearly 700,000 people and an economic recovery that has yet to be felt by the poor.

Polls show da Silva with a commanding lead that could possibly even give him a first-round victory without any need for a runoff.

But even if that doesn't happen, the vote itself marks an improbable political comeback for da Silva, a 76-year-old former metalworker who rose from poverty to the presidency — then just four years ago was jailed as part of a massive corruption investigation that targeted his Workers' Party and upended Brazilian politics.

Da Silva’s conviction for corruption and money laundering sidelined him from the 2018 race that polls showed him leading, and allowed Bolsonaro — then a fringe, far-right lawmaker — to cruise to victory.

A year later, however, the Supreme Court annulled da Silva’s convictions amid accusations the judge and prosecutors manipulated the case against him, which has allowed him to run again now.

In many ways, Sunday's vote is the race that should have been in 2018. And many voters are acutely aware of that.

Among them is Antônio dos Santos, who voted for Bolsonaro in 2018 but will cast his ballot for da Silva this time.

“What I’m most upset about is when the pandemic started, (Bolsonaro) seemed to be taking it as a joke,” said dos Santos, a 55 year-old hairdresser who lives in the working-class Rio neighborhood of Rocinha. "Children dying, women losing their husbands. He’s not the man I thought he was.”

“What matters to me is to see Brazil doing well, everyone working, everyone eating,” he said.

Throughout his campaign, da Silva has sought to remind working class voters like dos Santos that his 2003-2010 presidency was marked by social advancement propelled by a massive social welfare program that helped lift tens of millions into the middle class.

That isn't what Bolsonaro, who frequently refers to da Silva as a “thief” and an “ex-jailbird,” wants voters to remember.

A former army captain, he campaigned in 2018 on an anti-corruption platform while defending a show-no-mercy approach to crimefighting, traditional family values and national pride. His 2018 slogan — “Brazil above all, God above everyone” — is back this year.

But this time around Bolsonaro's campaign has met fresh headwinds, in part due to his COVID-19 policies that a Senate investigation said warranted criminal charges to hold him responsible for Brazil's 685,000 pandemic deaths.

Women in particular have turned their backs on him. Many were dismayed by his apparent lack of empathy during the pandemic as he spurned vaccines and largely ignored their plight as the primary caretakers of children and the elderly while Brazil was ravaged by the virus.

“Bolsonaro was already rejected by women in 2018, but it got worse,” said Carolina Botelho, a researcher with the Institute of Social and Political Studies at the State University of Rio de Janeiro.

In that demographic, da Silva still enjoys a 20-point lead over Bolsonaro, who has sought to improve his standing among women and others by highlighting his administration’s generous pandemic welfare program.

But tough times remain. As elsewhere in the world, Russia’s invasion of Ukraine stoked inflation and food insecurity in Latin America’s largest nation. Bolsonaro has softened the blow by lowering taxes on fuel and supporting Congress' push to extend and increase welfare payments for millions of struggling Brazilians.

Da Silva has denounced the latter measure as a temporary fix, given it ends in December. He promises to fight hunger and poverty the way he did during his presidency, through his globally acclaimed Zero Hunger strategy. His pick for running mate, Geraldo Alckmin, a center-right former rival, was a nod to financial markets — more recently bolstered by an endorsement from a former central bank governor who highlighted sound macroeconomic policy in a previous da Silva administration.

Bolsonaro's four years in office have also been marred by the Amazon rainforest’s worst deforestation in 15 years.

But no single Bolsonaro claim has driven moderates to rally around da Silva like the current president's insistence that Brazil’s electronic voting system is prone to fraud. His claim, for which he has presented no evidence, has raised concerns that he could reject election results and attempt to cling to power.

Earlier this month, Bolsonaro said in an interview that if he doesn’t win Sunday’s first round, “something abnormal has happened within the electoral court.”

Bolsonaro has even accused top members of the electoral authority, who are also Supreme Court justices, of working against him. Such comments fuel a sense among Bolsonaro’s avid supporters that the race is rigged, reflected in comments online and with political violence increasingly spilling into real life.

“Bolsonaro is seen as a threat beyond political divergencies, but also to democracy and institutions,” said Mário Braga, political analyst at Control Risks, adding that it helps explain why da Silva has garnered a bevy of endorsements.

Among the few demographics where Bolsonaro is polling in front are evangelical Christians, who represent nearly a third of the population. Evangelicals helped carry him to power in 2018, and he proceeded to tap members of their churches for important ministries and for a Supreme Court nomination.

Bolsonaro has shored up their support this time around with a campaign to portray the nation as spiritually ill and arguing only he can safeguard the Christian faith. His targeting of da Silva includes linking him to the country’s Afro-Brazilian faiths.

Bolsonaro and his supporters have argued this year’s polls underestimate the far-right leader’s popularity.

“The ideas of the right have always been ours: family, religion, education, sexual boundaries. … We are conservative,” said María do Carmo, who will vote for Bolsonaro again on Sunday. Echoing many other Bolsonaro backers, do Carmo added that she mistrusted polls and the country’s electronic voting machines.