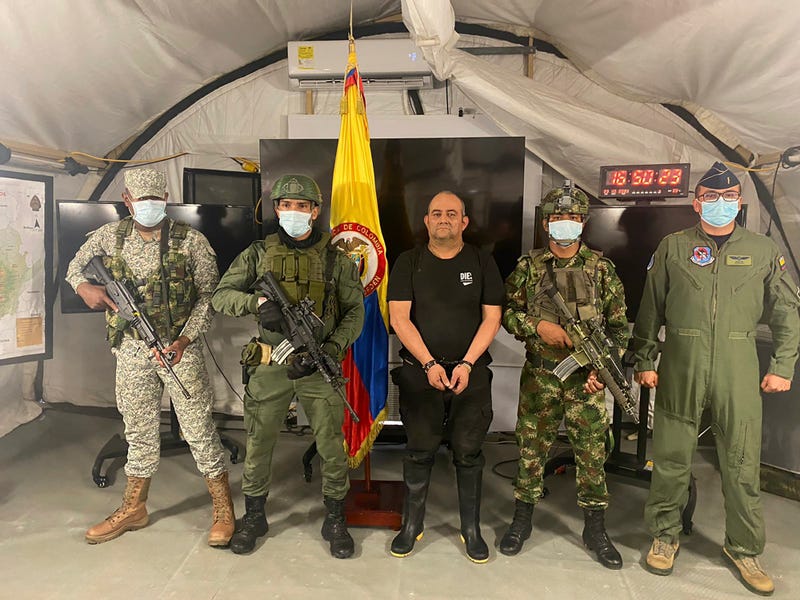 BOGOTA, Colombia (AP) — Colombian security forces have captured the country’s most wanted drug trafficker, a rural warlord who stayed on the run for more than a decade by corrupting state officials and aligning himself with combatants on the left and right.

President Iván Duque likened the arrest Saturday of Dairo Antonio Úsuga to the capture three decades ago of Pablo Escobar.

Úsuga, better known by his alias Otoniel, is the alleged head of the much-feared Gulf Clan, whose army of assassins has terrorized much of northern Colombia to gain control of major cocaine smuggling routes through thick jungles north to Central America and onto the U.S.

He's long been a fixture on the U.S. Drug Enforcement Administration’s most-wanted fugitives list, for whose capture it had been offering a $5 million reward. He was first indicted in 2009, in Manhattan federal court, on narcotics charges and for allegedly providing assistance to a far-right paramilitary group designated a terrorist organization by the U.S. government. Later indictments in Brooklyn and Miami federal courts accused him of importing into the U.S. at least 73 metric tons of cocaine between 2003 and 2014 through countries including Venezuela, Guatemala, Mexico, Panama, and Honduras.

But like many of his gunmen, he's also cycled through the ranks of several guerrill