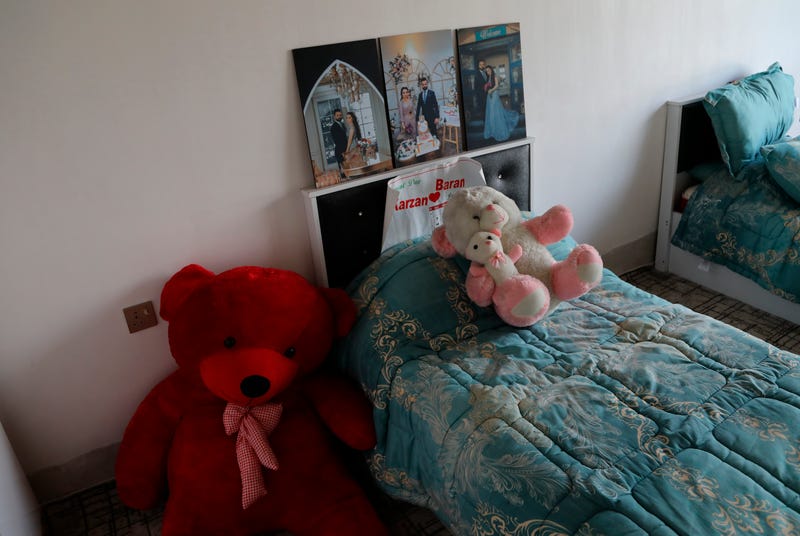 IRBIL, Iraq (AP) — Snow globes, teddy bears and makeup brushes — these were the trinkets left behind in northern Iraq by Maryam Nouri who perished this week along with at least 26 others in an ill-fated voyage with dreams of reaching the United Kingdom.

A wake for Nouri, called Baran by her friends and family, was held in Soran on Sunday in the Kurdish semi-autonomous northern region. Male relatives sat outside the family home, counting prayer beads in her remembrance, in line with local customs. Her body has not yet reached Iraq, pending legal issues, they said.

Nouri, 24, had boarded an inflatable boat carrying migrants with hopes of being reunited with her fiancé, Karzan in Britain. She had managed to get a Schengen visa to Europe, and traveled to Italy on Nov. 1, and later Germany and France.

She did not tell her fiancé she was planning on making the voyage across the English Channel illicitly on Wednesday until it was too late. The flimsy boat sunk a few miles (kilometers) from the French coast, drowning at least 27 migrants bound for Britain. France’s interior minister called it biggest migration tragedy on the crossing to date. The nationalities of the dead were not immediately known, but many are believed to be Iraqi.

Ever-increasing numbers of people fleeing conflict or poverty in Syria, Afghanistan, Sudan, Iraq, Eritrea or elsewhere are risking the perilous journey in small, unseaworthy craft from France, hoping to win asylum or find better opportunities in Britain. The crossings have tripled this year compared to 2020.

Nouri had tried many times to get a visa to the U.K. but was unsuccessful.

Iman Hassan, Nouri's cousin, said she had a premonition something was terribly wrong before receiving news of her death. Her sister had rushed in with news of a boat that had sunk in the channel and there was no news of Nouri.

“I sensed in my heart, because I couldn't sleep for two nights before it happened,” she said, seated outside the family home Wednesday.

A disproportionate number of the migrants have been from Iraq’s relatively stable Kurdish region, who chose to sell their homes, cars and other belongings to pay off smugglers with the hope of reaching the European Union. Rising unemployment, endemic corruption and a recent economic crisis that slashed state salaries have undermined faith in a decent future for their autonomous region and kindled the desire in many to leave.

Nouri had called Hassan, also her best friend, on Oct. 1 to tell her she was traveling to Europe. The two met later, their very last.

Hassan had asked her if she intended to make the journey with the help of smugglers, warning her this would be dangerous.

“You see what happens to people smuggled by boat, people fall, break their legs and others die,” she recalled telling her.

But Nouri dismissed her fears. She was going via airplane, she reassured her.

It was her first time flying in a plane.

In Nouri's untouched bedroom, large red teddy bears cover her neatly made bed. Make-up brushes and snow globes — one of a newly married pair — and photos of her betrothed cover the vanity.

She was one of eight daughters. Hassan said she was the kindest.

“She took care of my grandmother when she was sick in bed. She was a very kind girl,” she said.

Nouri was smart and determined, Hassan said. “In any job she took, she was successful,” she said.

She decided to take up a career in cosmetics when finishing high school with hopes of becoming a makeup artist. She had completed courses on the subject.

His daughter had her engagement ceremony here, he said, pointing to the area where relatives had gathered to pay respects.

“They (the couple) were trying to build a decent life for themselves, but it ended,” he said. “She sank in the sea and passed away before arriving.”