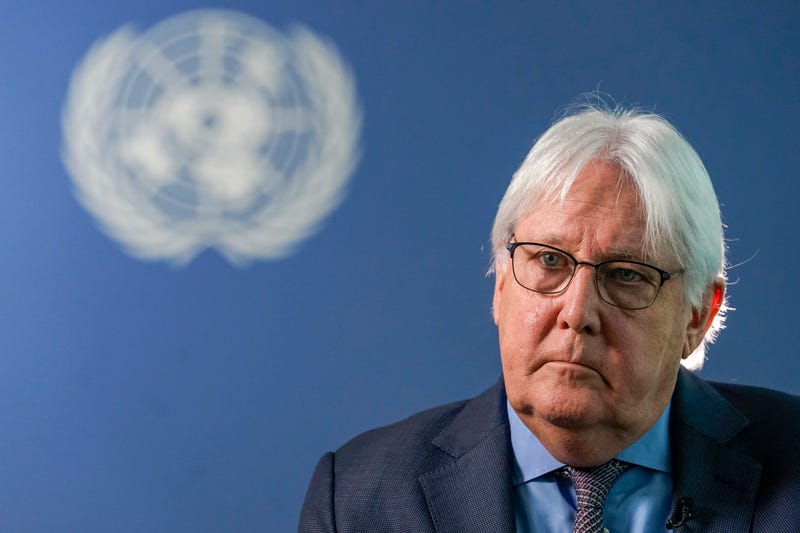 ABUJA, Nigeria (AP) — The Islamic extremist insurgency in northeast Nigeria is a “very, very dangerous (and) very threatening” crisis that needs more than $1 billion in aid in 2022 to assist those hit by the decade-long conflict, United Nations humanitarian chief Martin Griffiths said.

In an interview with The Associated Press, Griffiths, head of the U.N. Office for the Coordination of Humanitarian Affairs, urged the world not to forget the continuing devastation caused by Boko Haram and its offshoot, the Islamic State West Africa Province, together blamed for killing tens of thousands of residents and displacing millions.

“This is a very different kind of operation and very difficult also to deter ... a grave and clear and present danger, obviously, to the people and a priority for the government,” Griffiths said in Abuja, Nigeria’s capital. “The world needs to remember this is a tragedy that needs to be sorted out.”

Boko Haram, Nigeria's homegrown Islamic extremist rebels, launched an insurgency in the country's northeast in 2009, to fight against western education and to establish Islamic Shariah law in Nigeria. Their rebellion has spread over the years to the neighboring West African countries of Cameroon, Niger and Chad. Boko Haram drew international condemnation in 2014 when they abducted 276 schoolgirls in Chibok village, prompting the #BringBackOurGirls campaign. More than 100 of those abducted students are still missing.

The conflict has resulted in approximately 35,000 deaths, according to the U.N. Development Program. For each casualty, "an additional nine people, primarily children, have lost their lives due to lack of food and resources,” the U.N. agency estimated in a report in June last year.

Nigeria's military continues to try to quell the violence especially in northeastern Borno state and the Lake Chad region, but the conflict has continued year after year.

The faction allied with the Islamic State group this week released a video showing dozens of child fighters training in open fields and being taught in classrooms. The video is a “clear” message that the extremists “are here to stay” and “a new generation is coming,” according to Vincent Foucher of the International Crisis Group.

Nigeria's security forces have also beefed up their air capacity “which means it is difficult for (the Islamic State offshoot) to get away with the large attacks it carried out two or three years ago,” Foucher added.

The U.N. humanitarian chief said it's not clear when displaced populations will be able to return to their homes, although it is a crucial goal so that people are given hope "that maybe it’s not an indefinite exile from their villages.”

For 2022, the U.N. estimates Nigeria's northeast will need development assistance of more than $1 billion in addition to government spending, he said. The funds are needed to provide food and healthcare to the millions of people displaced and to those who remain at their homes but are vulnerable to attacks. Nigerian officials “understand this is not a quick fix," said Griffiths after meetings with government authorities.

Beyond the northeast, the northwest and central parts of Nigeria are experiencing violent attacks carried out by armed groups who had traditionally worked as nomadic cattle herders and are caught up in a decades-long conflict with Hausa farming communities over access to water and grazing land.

Nigeria's fight against extremists "can’t be won on the battlefield,” said the U.N. official, who urged more community development efforts.

“You win civil wars in the minds of the people who live there," said Griffiths. "If you don’t have the communities on your side, it doesn’t really matter how much else you’ve got on your side. You won’t make peace.”