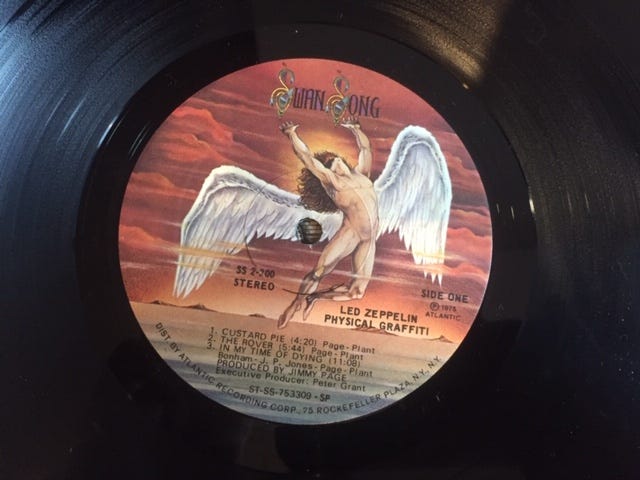 How much of the music you play is actually vinyl?

I was once the wizard of wax. The viceroy of vinyl. A young dj with nimble fingers and steady hands cueing up records with a back half-turn so the spin was at speed when the needle hit the track

I held sway with the subtle segue.

On the overnight show in 1977, I played tricks on the high school seniors who heard me start "Can’t You Hear Me Knockin'" and finish with a seamless crossfade into the end of Loggins and Messina "Angry Eyes."

Minds blown. Drugs blamed. All the tricks of the vinyl trade.

And when listeners heard the porcine prattle of the longer song,

(Like the Pigs grunting on a Pink Floyd album)

they always suspected the solitary dj alone in a dark building seeking the refuge of a downstairs restroom because there was no computer that could be instructed to play the next song.

So if a Pink Floyd song skipped for 15 minutes at 1 in the morning because the rest room had no radio monitor, who really cared? Except for friends listening in a bar at 1 in the morning where the clientele kept yelling at the bartender to fix the skipping record while he explained it was on the radio. No. You never live that down. Until your friends get too old to remember stuff like that really happened.

As much as I learned about Shakespearean sonnets in college, what I really knew was the vinyl record. How the softer passages on an album were a darker shade. How you could intuit where to drop the needle in the middle of a comedy track.

You learned an album left in a car on a hot summer day would melt like the painting of Dorian Grays face.

You learned that your dad’s remedy of taping a penny on the tone arm to keep an album from skipping was a kind of audiophile barbarism.

It was all a graceful hand dance of sliding the record out of its inner sleeve. Edges of the record in the gentle palm of your hand, flipping the record over to find the side you wanted. The Russian roulette of finding a song on a double album which could panic even the most heavily sedated announcers.

How often do we actually use vinyl? Rarely. When 25,000 songs are stored in a database found with the click of a mouse, the modern radio station defers to modern convenience.

But part of this radio station is remembering where we came from. And we came from all vinyl with grids on the front of the album cover to write down when we played a song. A database of ink and graph paper. A canvas for inappropriate commentary. A time when the zipper on the front of the Rolling Stones Sticky Fingers might injure the cover of an adjacent Let it Bleed.

But when Chicago needs it most, we vinyl junkies you hear on the radio carry armfuls of own own records into the XRT studio so we can spend the day helping you remember what was like to sit in a dorm room with friends listening to the entire side of a record album. We’ll do that this Friday. A break from the shuffling madness.

This Friday 93XRT goes all vinyl album sides from 9am to midnight.