ANNOUNCE FIRST SHOWS TOGETHER IN OVER A DECADE

THE DUO BEHIND THE ACADEMY AWARD WINNING “FALLING SLOWLY”

WILL PERFORM A CAREER-SPANNING SET OF SONGS FROM

THE SWELL SEASON, ONCE AND THEIR INDIVIDUAL CAREERS 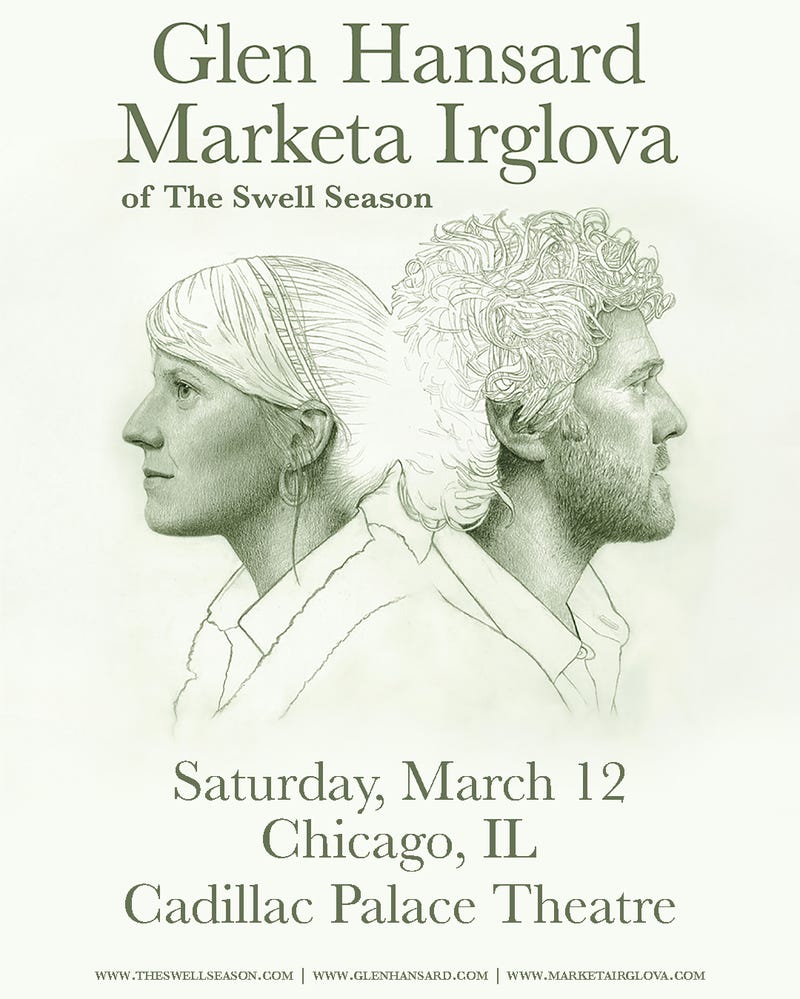 Marketa Irglova and Glen Hansard are reuniting this spring to grace select stages for the first time in over ten years. A Chicago performance has been scheduled at the Cadillac Palace Theatre on Friday, March 12, 2022. Show time is 7:00 pm. Reserved tickets ($75.00 / $65.00 / $49.50 / $39.50) will be available on Friday, November 12 at 10:00 am. This event is being presented by Jam Productions in association with Metro.

The pair came to prominence starring in the 2007 film Once and winning the Academy Award for Best Original Song with their composition “Falling Slowly” in 2008. Their collaboration continued as The Swell Season, who released the critically acclaimed album Strict Joy in 2009 via ANTI-. The two branched out into solo careers in 2011, though their legacy as a duo has continued to grow.

In 2012, Once, The Musical debuted and went on to be nominated for eleven Tonys, winning eight overall, including the coveted Tony Award for Best Musical. It would run for three years on Broadway, tour the world twice over and expose their music to a new legion of fans who have yet to experience them performing together live. In the time since their last public appearance together in North America, the two have remained in regular contact making the odd appearance on each other’s records or on stages randomly whenever paths would cross.

Since their last appearance together, both Irglova and Hansard have kept themselves busy. Irglova has released three longform singles in the last two years - “Mother”, ”Among the Living”, and ”Quintessence” – and has a new full length album planned for 2022. She just released a video/short film for the song “Among the Living”, which was filmed in and around her home in Iceland.  Hansard most recently collaborated with Cat Power and Eddie Vedder on the soundtrack for the film Flag Day, released in August of this year. Hansard also performed as part of Eddie’s new band The Earthlings at the 2021 Ohana Festival. He is also preparing new music for 2022.

Over the course of the last decade, Once has become a modern classic and a cultural touchstone being referenced in everything from The Simpsons to, most recently, Ted Lasso. The musical is a favorite to be staged by high schools and colleges everywhere with “Falling Slowly” earning a spot as a seasonal favorite for shows like “The Voice” and “American Idol”.