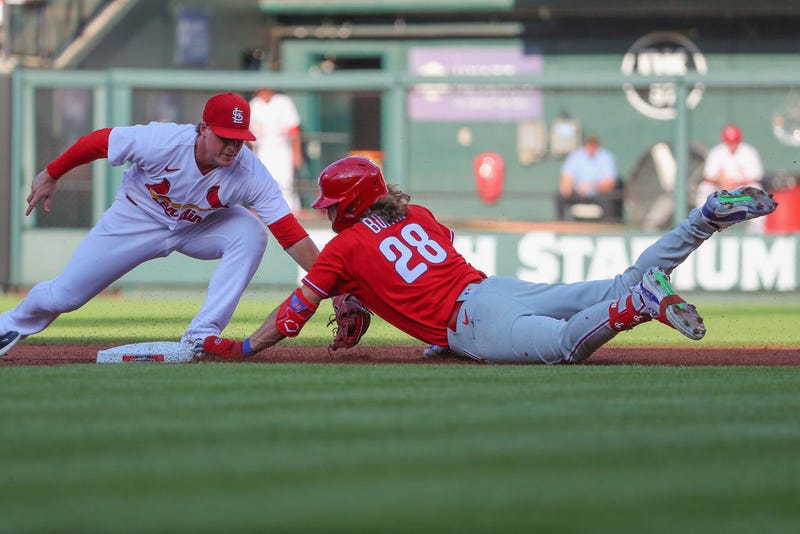 Cardinals VS. Phillies Photo credit (Photo by Dilip Vishwanat/Getty Images)
By The Wake Up

The St. Louis Cardinals, in conjunction with Major League Baseball’s league-wide release, announced the start times for its best-of-three National League Wild Card Series against the Philadelphia Phillies. First pitch for Game 1 on Friday, October 7, will be at 1:07 PM CT and televised nationally on ABC. Game 2 on Saturday, October 8, will begin at 7:37 PM CT and televised nationally on ESPN2. A potential winner-take-all Game 3 on Sunday, October 9, will start at either 6:07 PM CT, 6:37 PM CT or 7:37 PM CT (depending on how many of the four MLB Wild Card Series have been completed) and televised on ESPN or ESPN2.

A Texas mom thinks "Hocus Pocus 2" can expose kids to SATAN. "Everybody thinks it's fake and innocent, but they could be casting any type of spell that they want to, anything could be coming through that TV screen into your home."

The producers of "Rust", including Alec Baldwin, have settled the wrongful death lawsuit filed by the husband of cinematographer Halyna Hutchins. Filming will resume in January, but criminal charges could still be filed.

Christian Bale said Leonardo DiCaprio gets offered roles first . . . and everyone around their age owes their careers to Leo for passing on whatever project he didn't want.

Cheryl Burke and her ex-husband Matthew Lawrence have one issue left to settle in their divorce: Custody of their dog Ysabella. Cheryl says they're headed to court because "I couldn't imagine my life without her."

On a related note, Martha Stewart shared the recipe for her homemade dog food.

Ozzy Osbourne came out with a makeup collection with Rock & Roll Beauty. It's available now and includes items like a bat-shaped eyeshadow palette, a gothic handheld mirror, and temporary tattoos.

A post shared by Rock and Roll Beauty (@rockandrollbeauty)

Post Malone inked up his face even more. He got his daughter's initials, "DDP" tattooed on his forehead.

Kristen Stewart showed off a new look in a short film that opened a Chanel fashion show.

Hilary Swank is pregnant with twins.

Reese Witherspoon and Build-a-Bear are making "Goldilocks and the Three Bears" movie.

Check out the trailer for David Harbour as a crime-fighting Santa Claus in "Violent Night". It hits theaters December 2nd.

Check out Adam Devine in a teaser for the "Pitch Perfect" spin-off series "Bumper in Berlin".

And Paul McCartney is the most loved member of The Beatles, according to a YouGov.com poll. And the three most popular songs of theirs are: "Yesterday", "Here Comes the Sun", and "Hey Jude".