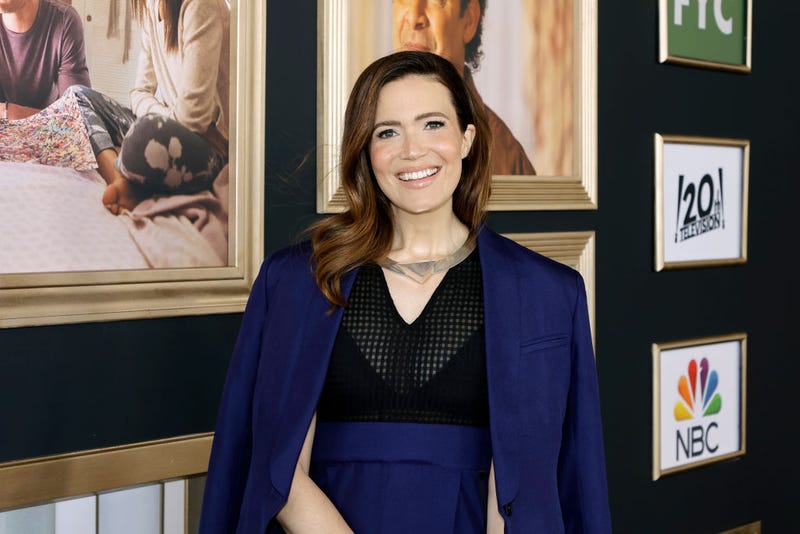 Mandy Moore, Meghan Trainor, and Ashley Tisdale are part of a "cool mom club" organized by Hilary Duff. Mandy says, "It's so much fun. I'm very, very grateful to have those resources and just incredible women to be able to lean on."

MANDY also revealed that they started shooting the series finale of "This Is Us" three years ago, because the young kids were growing up too fast.

KHLOE KARDASHIAN is adamant that her nose job is the only surgical procedure she's had. But the plastic surgery rumors are less offensive to her than getting the constant comparisons to her sisters or her younger self.

Meanwhile, her sister KIM is teaming up with Beyond Meat. You'll notice, however, that the burger Kim is "chewing" doesn't even have a bite taken out of it. And she appears to be fake-chewing throughout the video.

Here's BRET MICHAELS demonstrating how to properly fold a bandana.

SAMUEL L. JACKSON is joining CHRIS PRATT in an upcoming animated "Garfield" movie. He will be voicing Garfield's dad Vic. If you've never heard of him, you're not alone. He's a new character.

A show that SETH GREEN was developing is on hold right now because it was supposed to be based on an NFT he bought . . . and someone stole the NFT and re-sold it. Seth is trying to work this out with the new owner.

WILL SMITH explained on DAVID LETTERMAN's Netflix show why he doesn't curse in his raps. When he was young, his grandma told him, "Truly intelligent people do not have to use words like these to express themselves. Please show the world that you're as smart as we think you are."

AEROSMITH had to cancel the first set of dates in their Las Vegas residency, because STEVEN TYLER is back in rehab. The band says he voluntarily entered a program after a relapse due to painkillers.

TasteOfCountry.com has a list of the most played country songs on the year you graduated. They started with last year's "Famous Friends" by Chris Young and Kane Brown . . . and took it all the way back to 1946 for the Bob Wills and His Texas Playboys classic "New Spanish Two Step".

After yesterday's tragic school shooting in Texas, CBS pulled last night's season finale of "FBI". It wasn't about a school shooting, but there was a storyline about a student possibly being involved in a deadly robbery. CBS didn't say whether the episode will air at a later date.

Before last night's NBA Playoff game, Warriors coach STEVE KERR went off about the elementary school shooting in Texas. He said, "I'm so tired of getting up here and offering condolences to the devastated families that are out there . . . I'm tired of the moments of silence. Enough."