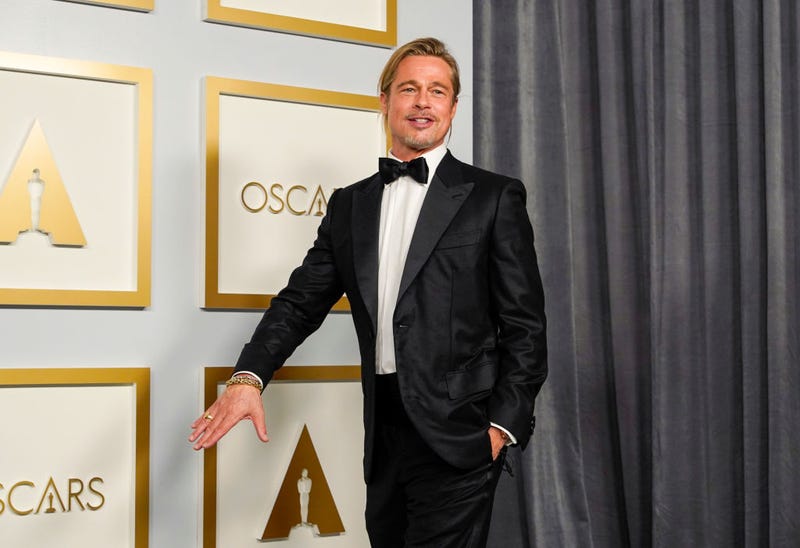 In a new interview, BRAD PITT says he's on the "last leg" of his career. He also reveals that he quit smoking, and stopped drinking thanks to a "private and selective" 12-step program.

"The Office" redid their intro with a "Minions" twist. Instead of STEVE CARELL as Michael Scott, it's Steve as Gru.

"Back to the Future" is coming to Broadway next year. Not much else is known, but you can sign up for ticket information.

Synchronize Your Watches — The Future's coming to Broadway in 2023!!!

Sign up to be the first to buy tickets! https://t.co/ZvFEjJ72wR pic.twitter.com/ZGr90KC6sN

The Academy of Motion Picture Arts and Sciences will honor MICHAEL J. FOX with the Jean Hersholt Humanitarian Award. It'll be given out at their Governors Award ceremony on November 19th. The award is given to someone whose humanitarian efforts bring credit to the film industry. Previous winners include Gregory Peck, Frank Sinatra, Oprah Winfrey, Angelina Jolie, and Dreamworks founder Jeffrey Katzenberg.

HBO shared some new poster art for "House of the Dragon"...

Here's the trailer for the "Lyle, Lyle, Crocodile" movie, featuring SHAWN MENDES as the voice of Lyle.

JEFF WITTEK is suing fellow YouTuber DAVID DOBRIK over a stunt that went wrong two summers ago. Dobrik was using an excavator to swing Wittek around, and Wittek crashed right into the arm of the machine. He wants more than $10 million. (WARNING: You can check out video of the accident here. It contains profanity, and it's pretty gnarly.)

STEVE-O is the first to admit that the early days of "Jackass" had a negative impact on kids. But he no longer takes responsibility for copycat stunts gone wrong since the dawn of YouTube and shows like "Ridiculousness".

A list from Ultimate Classic Rock of the most important music festivals in U.S. history includes Woodstock in 1969, Lollapalooza in 1991, and Coachella in 1999.

SHANIA TWAIN woke up yesterday "feeling unwell and with no voice" and had to cancel last night's show at Zappos Theater in Vegas. She posted a statement on social media saying she's under strict doctor's orders to rest and not sing.

CHRIS STAPLETON came down with COVID-19 and is postponing three shows. Tonight's Salt Lake City concert will take place July 1st. And this weekend's Denver shows have been moved to July 2nd and 3rd.

Some sad NFL news... Former Colts and Ravens defender TONY "THE GOOSE" SIRAGUSA died yesterday. There's no word on the cause of death. He was 55. And Ravens linebacker JAYLON FERGUSON died Tuesday night of a possible overdose. He was only 26.

And check out this throwback to when a mini-ALFONSO RIBEIRO tried to sell us an instructional book on breakdancing.