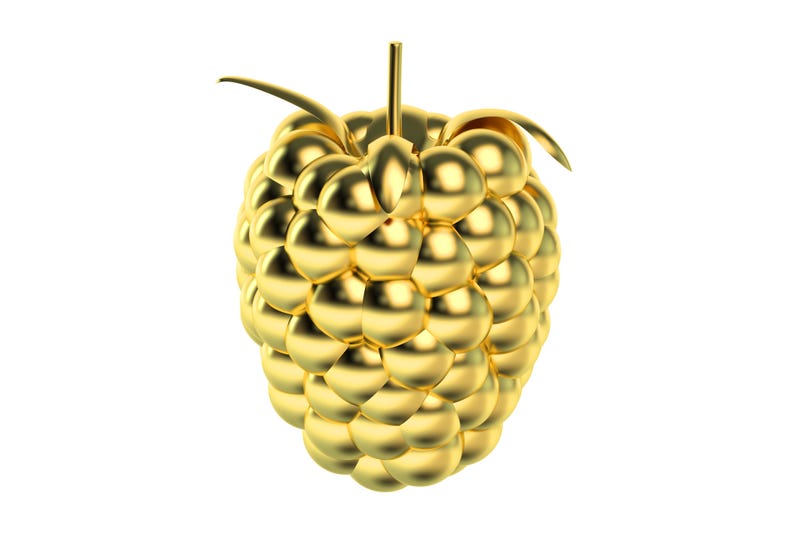 Golden Raspberry Photo credit (Getty Images)
By The Wake Up

Kylie Jenner and Doja Cat had an awkward interaction at Paris Fashion Week. What made it even worse was that Kylie was wearing a giant lion's head on her chest and Doja was covered in 30,000 red crystals.

Noah Schnapp called out his teachers in his senior yearbook. He said, "To all the teachers that never taught me a thing", then referred to a "Stranger Things" scene where Dustin saying, quote, "You're really no help at all, you know that."

Danny Trejo just lucked into acting. He was a reformed addict counseling an actor, and he visited a movie set and was offered a part as an extra. He was asked if he could act like a convict, and he said, "I'm a professional."

Zoe Saldana became the first actor to have four films make over $2 million at the worldwide box office. They are "Avatar", "Avatar: The Way of Water", "Avengers: Infinity War", and "Avengers: Endgame".

The Post cereal company recently launched a line of instant cereal cups called OK Go!, and the band OK Go has been threatening to sue. So Post filed legal papers, asking a court to rule that they can use the name.

Beatrice Grannò and Simona Tabasco from "The White Lotus" are starring in a Valentine's Day ad campaign for SKIMS.

And Jessica and Ashlee Simpson's mom is 62? In this picture, she looks like she could be their sister!