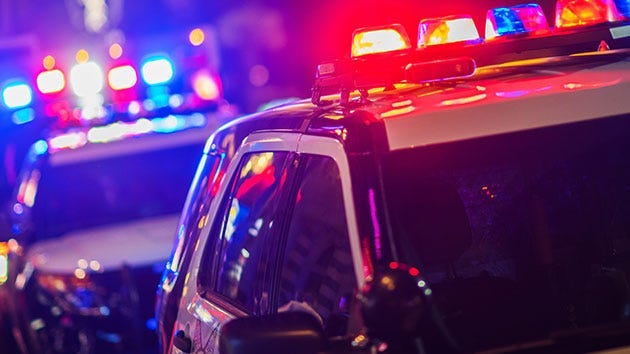 FARMINGDALE, N.Y. (1010 WINS) – A Nassau County police officer and four other people were hurt after a slashing at a hookah bar ended in a hit-and-run on Long Island early Saturday.

Police were searching for a white minivan with front-end damage Saturday after the bar melee in the wee hours of the morning.

It all started with a fight at the Mystique Hookah Lounge near Main Street and Conklin Street around 2:30 a.m.

Police say knives were pulled during the fight and that three people were slashed.

Nassau County police officer struck by hit and run driver while responding to slashing at a bar in Farmingdale. In all 5 people hospitalized. pic.twitter.com/3YoqTHQcvC

At some point, those involved ran out into the parking lot, where one man who'd been slashed across the neck collapsed to the ground, police say.

Nassau County officers responded to the parking lot. Two of them were trying to help the slashing victim when the van – possibly carrying the slasher – sped towards them.

The van hit a parked Nissan, which spun into a bystander, police say.

One officer jumped out of the way of the van, but the second officer and the slashing victim were hit before the van sped away, police say.

In all, five people were taken to a hospital – the three who were slashed and the two run over, including the cop.

The officer was in stable condition Saturday.

Patrons at a bagel store nearby were stunned to hear about the wild altercation.

“It’s terrible. People need to control themselves,” one man said. “It comes down to the individual person. You can’t just blame a bar.”