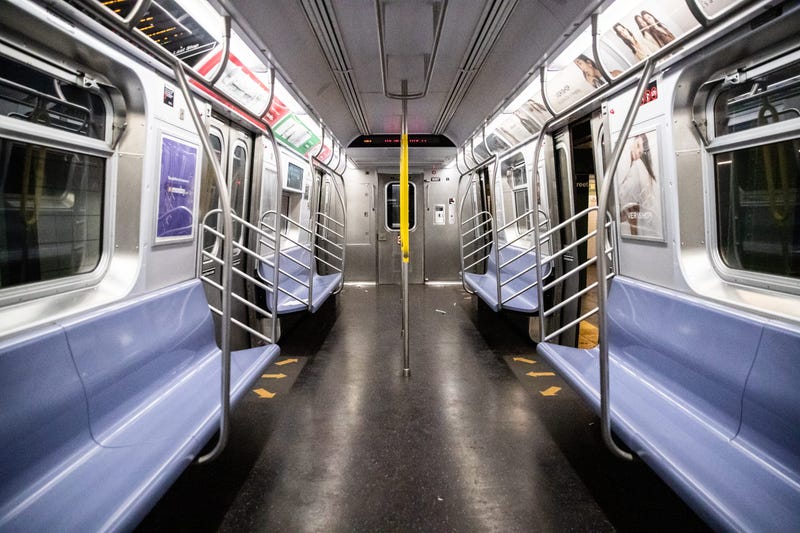 NEW YORK (1010 WINS) -- Gov. Andrew Cuomo said Thursday that the subway will be closed for several hours each night to allow the MTA to disinfect trains during the coronavirus outbreak.

The governor said that subway trains and buses, along with Metro-North and LIRR trains, will be disinfected each night. The MTA has already been disinfecting subway trains every 72 hours.

That means the subway will be closed from 1 a.m. to 5 a.m. every night, Cuomo said, adding that only about 10,000 people ride the system during that time.

“You have to disinfect every place a hand could touch on a subway car. Every rail, every pole, every door,” Cuomo said. “Or, coughing, sneezing, wherever droplets could land.”

The cleaning of the Metro-North and LIRR fleets will not require service disruption, the governor said.

The daily subway closures go into effect starting in the morning hours of Wednesday, May 6.

"The MTA is undertaking something that people would have said is virtually impossible. Trains and buses will be disinfected daily," Cuomo said.

"The right thing to do is to disinfect the train, every night," Cuomo told 1010 WINS.

Cuomo called the task a "daunting undertaking", but says that closing the ridership from 1 a.m. to 5 a.m., will give them an opportunity to disinfect the trains because ridership is down.

When asked about working with the city and the MTA to get everyone on the same page,  the governor said it's a joint effort. "To do something like this, everybody has to work together," he adds.

The governor said it's part of the MTA's Essential Connector Program and will require cooperation from City Hall, the MTA and NYPD.

Buses, shuttle vans and for-hire vehicles will be provided at no charge to essential workers so they can be transported to their jobs.

"It's not that easy to stop train service. You have to close down stations. You have to make sure people don't walk in. Then you have to figure out how to clean all these trains, all these stations," Cuomo said, adding "this is ambitious as anything we’ve ever undertaken."

The daily subway closures come amid rising concerns over the number of homeless peoples seeking shelter in the subway system. Daily ridership has plunged by more than 90 percent because of the pandemic.

“It’s a heck of an undertaking by the mayor, and I applaud him for his ambition here in stepping up and taking this on,” Cuomo said.

I asked the MTA to develop a plan to accomplish this.

They will do it by stopping MTA train service between 1am - 5am.

There will be alternative transportation during this time with buses, for-hire vehicles, at NO cost to essential workers.

When it comes to the coronavirus, Cuomo said there were 306 new deaths Thursday, bringing the state's death toll to 18,274.

There are currently 299,691 coronavirus cases in the state.

Cuomo said hospitalizations, intubations, ICU admissions and new COVID-19 cases were all down.

He said 933 more people were hospitalized with the virus from Wednesday to Thursday, a number he called "still unacceptable."

He said 4,681 had tested positive over that time period.

The governor focused much of his briefing on "tracing" people with coronavirus—an effort to track those who have the virus and everyone who was in contact with them.

“The more people that test positive, the more tracers,” Cuomo said. “So these things are all linked.”

Bloomberg and John Hopkins University are carrying carry out the recruitment, interviewing and training of a "tracing army" in consultation with the state Department of Health.

.@JohnsHopkins will develop a world-class online curriculum with a training program & online exam.

To qualify as a tracer you must pass the exam.

We will create a comprehensive playbook for contact tracing that will be available as a resource for any state or city in need.

John Hopkins will develop a "world-class online curriculum," Cuomo said, that consists of online training and an exam that must be passed to complete the program.

Cuomo said the training program is part of a partnership with CUNY and SUNY.

Bloomberg said the "playbook" for the program will be released to other states so they can improve their programs.