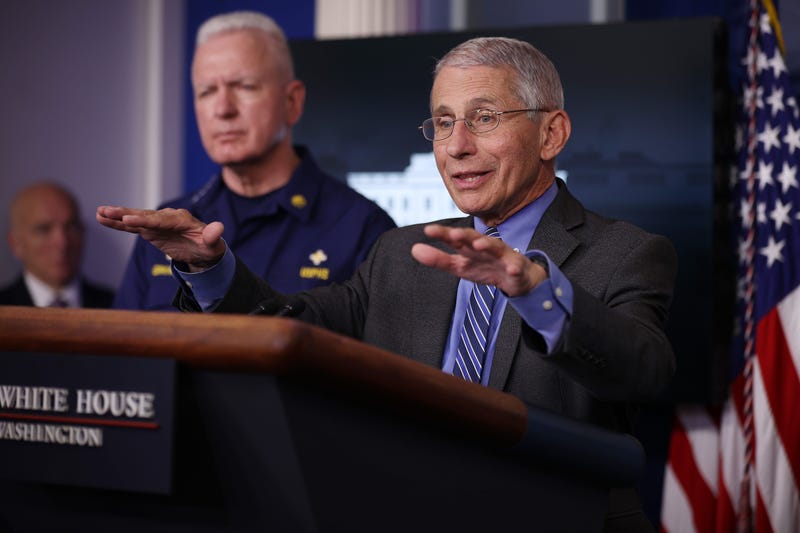 NEW YORK (1010 WINS) -- Dr. Anthony Fauci is confident the U.S. can turn around a surge in coronavirus cases, saying in a recent interview that “We've done it in New York.”

Fauci, the director of the National Institute of Allergy and Infectious Diseases, praised New York on PBS NewsHour, telling anchor Judy Woodruff in a Friday interview that the state set an example for the rest of the nation.

Fauci said states dealing with a surge of cases can bring those cases down if they get tests and “use them in the right manner.”

“Again, we have a problem. We need to admit it and own it. But we have got to do the things that are very clear that we need to do to turn this around, remembering we can do it,” Fauci said.

He added: “We know that, when you do it properly, you bring down those cases. We have done it. We have done it in New York. New York got hit worse than any place in the world. And they did it correctly by doing the things that you're talking about.”

New York reported low coronavirus numbers again on Sunday, including its lowest number of hospitalizations since the pandemic began—743 patients.

“We're continuing to progress forward through the COVID-19 pandemic in the face of a continued explosion of cases throughout the U.S.,” Gov. Andrew Cuomo said in a statement.

There were 46,204 tests conducted in New York state on Saturday alone, Cuomo said, with 502 cases coming back positive. That’s compared to over 10,000 new cases a day during the peak in April.

There have been 406,807 cases and 25,048 deaths in the state since the pandemic began, but daily increases have dropped precipitously since the peak.

The state saw its highest number of daily deaths, 799, on April 9.  On Saturday, the state reported 11 deaths.

While New York has so far kept a second virus surge at bay, Cuomo has faced blistering criticism over an internal report that found a controversial state directive that sent thousands of recovering coronavirus patients into nursing homes was “not a significant factor” in some of the nation’s deadliest nursing home outbreaks.

Scientists, health care professionals and elected officials assailed the report released this month for flawed methodology and selective stats that sidestepped the actual impact of the March 25 order, which by the state’s own count ushered more than 6,300 recovering virus patients into nursing homes at the height of the pandemic.