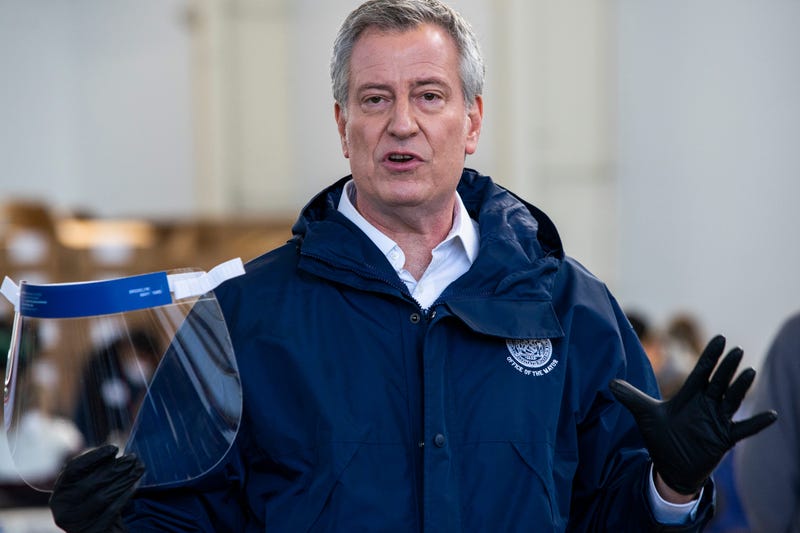 NEW YORK (1010 WINS) – Mayor Bill de Blasio said Wednesday that the city needs federal money ASAP or it may have to furlough or lay off some of its essential workforce.

The mayor told CNN’s “New Day” that essential workers like first responders and health care workers could be cut if the city doesn’t get federal stimulus money.

De Blasio said that in cities across the country, “people are either acting on furloughs and layoffs or preparing for furloughs or layoffs of the exact people who have been the heroes in this crisis, who we should be celebrating and supporting: first responders, the health care workers, the educators,” de Blasio said. “How are we going to support these people who we need if we don’t have any money?”

“I’ve lost $7.4 billion already and my economy can’t come back until I get that stimulus and get back to normal and provide those basic services,” de Blasio said.

“[Trump] is politicizing a pandemic,” @NYCMayor Bill de Blasio says about President Trump's comments that "bailouts" for blue states are unfair to Republicans.

“No stimulus, no recovery, no revenue. It only gets worse,” he added. pic.twitter.com/LsSvHyzNhN

De Blasio took aim at President Donald Trump at his daily briefing Tuesday, slamming him for not providing New Yorkers with additional funding.

"The president of the United States, a former New Yorker, who seems to enjoy stabbing his hometown in the back," de Blasio said, while holding up a copy of the New York Post featuring the headline: "Trump: We'll Be Back."

"What kind of human being sees the suffering here and decides that the people in New York City don't deserve help?" de Blasio said.

On CNN Wednesday, the mayor said the president is "politicizing the pandemic" to the detriment of New Yorkers.

“No stimulus, no recovery, no revenue. It only gets worse,” the mayor said of the lack of funds.

“The whole focus has to be on protecting the people of this country. That’s more important than the almighty dollar,” @NYCMayor Bill de Blasio says on states reopening, adding that he fears some are rushing to reopen and are "going to end up with people losing their lives” pic.twitter.com/BAkOTcCWmv

De Blasio said Wednesday that new data showing rates of new coronavirus infections declining in the New York metropolitan area but rising in other parts of the country suggest that other states may be moving too quickly to open up businesses and loosen restrictions on gatherings.

“This desire to restart and open up without necessarily referencing the actual facts of what’s going on is dangerous,” de Blasio said.

The mayor said New Yorkers have succeeded in lowering virus infection rates by largely following social distancing orders and by covering their faces in public. “

My message to the rest of the country is learn from how much effort, how much discipline it took to finally bring these numbers down and follow the same path until you’re sure that it’s being beaten back or else if this thing boomerangs you’re putting off any kind of restart or recovery a hell of a lot longer,” he said.