BREAKING: Ian is 5th-strongest hurricane to make landfall in US
By Maya Rajamani, 1010 WINS

The latest numbers bring the state’s case total to 418,225 and its death toll to 25,179, Cuomo said in a release Wednesday morning. The state is currently reporting a 0.87 percent positivity rate.

The four people who died of COVID-19 passed away in the Bronx, Brooklyn, Onondaga County and Schenectady County.

As of Tuesday, 564 people in the state were hospitalized with COVID-19, 134 of whom were in intensive care units and 69 of whom were on ventilators, he said.

Eighty-two patients were admitted to hospitals on Tuesday, and 84 were discharged, he added.

The breakdown of positivity rates by region is as follows: 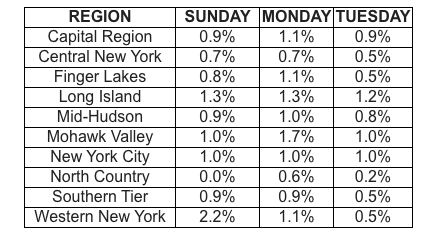