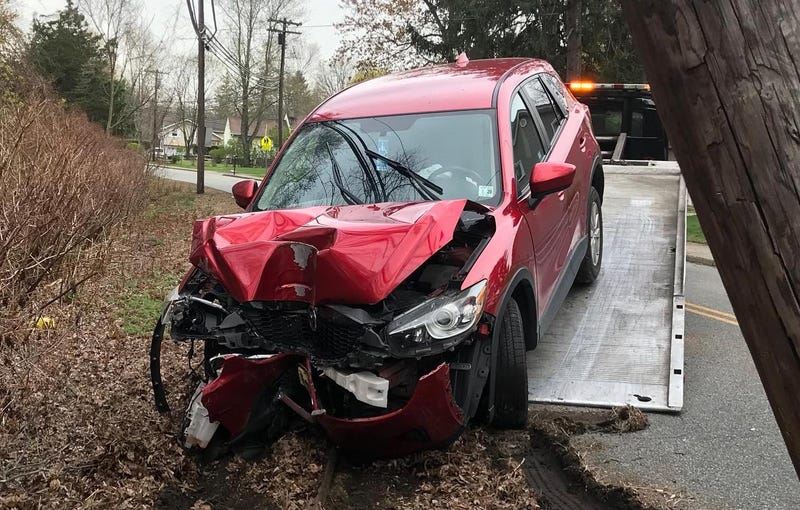 LINCOLN PARK, N.J. (1010 WINS) – A New Jersey driver passed out and crashed into a pole after wearing an N95 masks for "hours" in their car, police said.

Lincoln Park police shared a photo of the driver’s smashed SUV on Facebook Friday. He or she reportedly suffered non-life-threatening injuries.

The driver had been wearing an N95 mask “for several hours” before passing out and crashing into the pole Thursday, police said.

An “insufficient oxygen intake/excessive carbon dioxide intake” may have contributed to the crash, police said.

Police clarified that "while we don’t know this with 100 percent certainty, we do know that the driver had been wearing an N95 mask inside the vehicle for several hours and ultimately passed out while operating the vehicle."

“We also know that nothing was uncovered at the accident scene that would suggest that the driver was under the influence of drugs or alcohol,” police said. “It is certainly possible that some other medical reason could've contributed to the driver passing out.”

Police urged people to continue to follow directives on face coverings put in place by Gov. Phil Murphy to contain the coronavirus outbreak.

“We are not trying to cause public alarm or suggest wearing an N95 mask is unsafe,” police said, noting that the point of their post was to state that “in most cases, the wearing of this type of mask while operating a vehicle with no other occupants is unnecessary.”