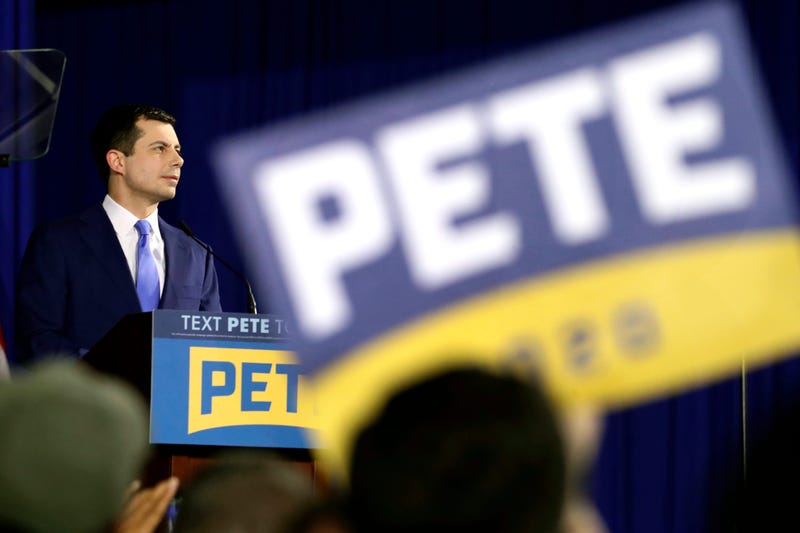 Photo credit FILE - In this Feb. 11, 2020 file photo, Democratic presidential candidate former South Bend, Ind., Mayor Pete Buttigieg pauses as he speaks to supporters at a primary night election rally in Nashua, N.H. Buttigieg’s presidential candidacy, though ending far short of its goal, will likely go down in history books as a success: proof of the remarkable advances made by LGBT Americans in their quest for equality and acceptance. (AP Photo/Mary Altaffer)
By David Caplan , 1010 WINS

Buttigieg -- through his PAC Win The Era -- also announced the endorsement of Rep. Kathleen Rice, whose district includes Nassau County.

The story of 2020 is not yet finished, and we get to write the last chapter.

November is our chance to elect leaders who offer bold, progressive solutions and who will permanently change the course of our of politics.

Buttigieg came to Torres' defense earlier this month, when the Sergeants Benevolent Association described Torres in a tweet as a "first class whore," Buttigieg -- like many lawmakers -- said the remark was homophobic. "The @SBANYPD's attack on @RitchieTorres is not worth re-sharing, but it does need to be called out and named for what it is: racist and homophobic," Buttigieg tweeted. "But there are many more of us who have your back and look forward to seeing you take your seat in Congress a few months from now."

Torres responded, "Thank you @PeteButtigieg for blazing a historic trail for countless LGBTQ candidates like myself." (Buttigieg did receive significant attention for his 2020 run, but Fred Karger was actually the first openly gay presidential candiate for a major political party, running in the 2012 GOP primaries and appearing on six state ballots.)

Torres continued, writing. "No amount of homophobia from the @SBANYPD will stifle the rainbow wave that has swept American politics. 2020 is only the beginning."

Thank you @PeteButtigieg for blazing a historic trail for countless LGBTQ candidates like myself. No amount of homophobia from the @SBANYPD will stifle the rainbow wave that has swept American politics. 2020 is only the beginning. https://t.co/Eh1MEQit7s

“I’m excited to announce our latest slate of endorsements, which include forward-thinking leaders across our country who are offering bold ideas that will change the course of our politics,” said Pete Buttigieg. “This election, we need to replace the current President and elect leaders at every level of our government who will deliver solutions to the biggest challenges we face. I believe the voices of these twenty-eight candidates are essential to changing our politics, and I’m committed to doing everything I can to make sure they are successful on November 3rd.”