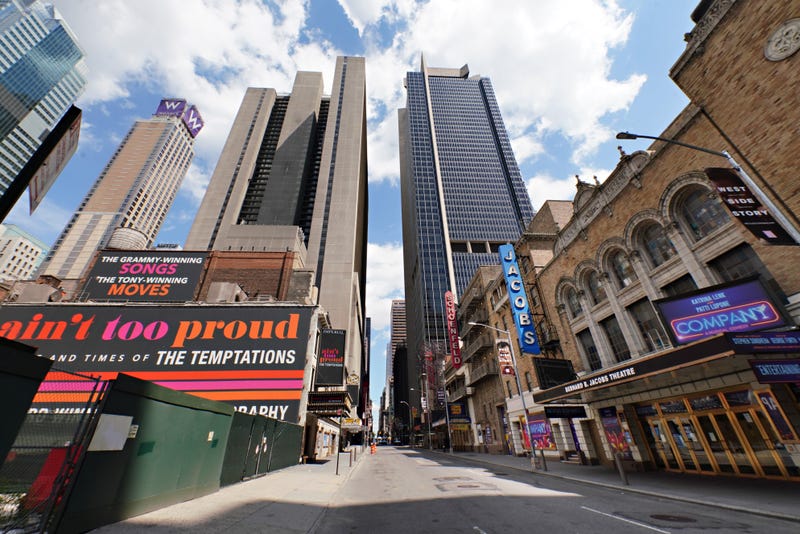 NEW YORK (1010 WINS) -- Sen. Chuck Schumer made a stop in Times Square on Friday as part of a “tour” promoting a bill that would provide $10 billion in funding to Broadway theaters and other live venues that closed when the COVID-19 pandemic hit.

The “Save Our Stages Act” would provide grants of up to $12 million to live venues across the U.S. over the next six months, Schumer, who co-sponsored the legislation, said at a news conference next to the TKTS stairs on Friday.

The grants would help venues cover their expenses and avoid closing for good, he said. Broadway theaters shut down on March 12, and will remain closed through at least Jan. 3, 2021, according to The Broadway League.

“The phantom of COVID has hit Broadway maybe the hardest of all the live venues in America,” Schumer said. “Revenues have been, and still are, totally frozen.”

“Today, we’re here to fight hard to keep the stages alive, the stories told, the show going on, and we’re fighting to make sure that New York City and Broadway get a ‘Lion’s King’ share of federal relief,” he added.

Funding through the grants would allow theaters and other venues to stay afloat until next spring, when, “God willing, there’ll be a vaccine, and Broadway will fill up again, and our live venues will fill up again,” Schumer said.

If that isn’t the case, Schumer and other backers of the bill will work to renew it, he added.