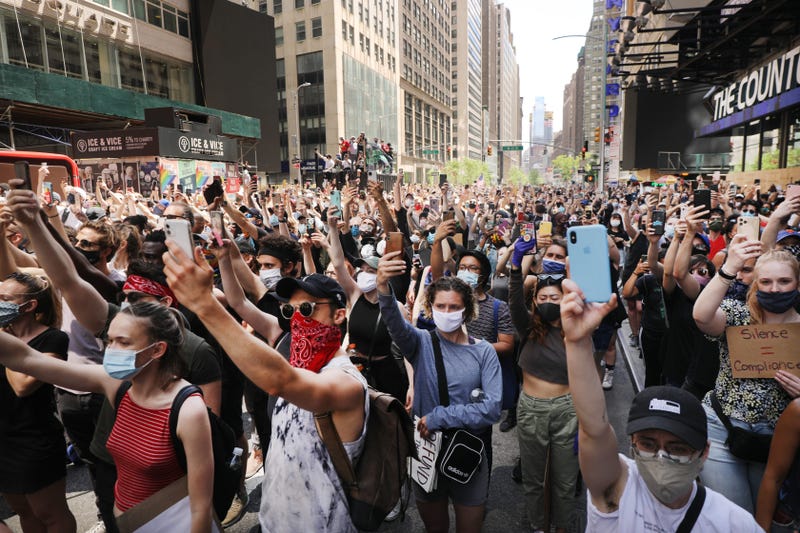 NEW YORK (1010 WINS) -- Peaceful protests over the death of George Floyd continued in New York City Sunday, with thousands of demonstrators taking to the streets yet again after Mayor Bill de Blasio ended the city's first curfew in decades a day early.

The city's 8 p.m. curfew was scheduled to remain in place through at least Sunday night. But de Blasio on Sunday morning announced that it would be canceled, saying, “Yesterday and last night we saw the very best of our city.”

The NYPD pulled back on enforcing the curfew Saturday night, as thousands filled the streets for another day of marches and rallies sparked by the May 25 death of Floyd in Minneapolis police custody.

Protesters chanted “Black Lives Matter” and held up signs as they marched across the city Sunday. Especially large crowds gathered in Manhattan and Brooklyn, but protests took place in Queens, the Bronx and on Staten Island as well. See below for live updates from Sunday evening's protests, as well as photos and videos from protests earlier in the day.

11:50 p.m. Protesters cheer as they march near 14th Street in Manhattan.

11:30 p.m. Fireworks go off over protesters on Park Avenue South in Manhattan.

11:28 PM first night of no curfew and Park Avenue South shut down with fireworks and protesters pic.twitter.com/B36QLzuBUe

10:35 p.m. Protests around Barclays Center in Brooklyn appear to be wrapping up.

10:20 p.m. Protesters march down Essex Street on the Lower East Side in Manhattan.

About 100 protesters march down Essex Street on LES with trombone accompaniment and police trail. pic.twitter.com/wgbhGeuYQ5

9:50 p.m. NYPD officers walk away from the base of the Manhattan Bridge, where protesters gathered to speak.

The commander gave the order for the cops to back off and the crowd of 400 or so demonstrators cheered pic.twitter.com/q3A2IZe0Do

This group has tried to cross the Manhattan Bridge from Brooklyn every night since curfew but got turned around and sent back each time.

This time, they’re through. But again met with a lot of cops pic.twitter.com/iOj6UBEML7

Out here on Flatbush Ave downtown Brooklyn and took a powerful shot of frontline workers....in more ways than one.#BlackLivesMattters pic.twitter.com/d1zQKbjwDv

8:35 p.m. Protesters cheer “Thank you!” as they pass The Brooklyn Hospital Center near Fort Greene Park.

8:05 p.m. Protesters calling for the city to slash the NYPD’s budget sing “Cut It” in Williamsburg, Brooklyn.

8 p.m. Protesters chant, “Be a human first!” outside Barclays Center in Brooklyn.

7:30 p.m. Protesters gather on the steps of the Department of Education building on Chambers Street in Manhattan.

Group of about 1,000 protesters reach NYC Dept. of Education behind City Hall and stop pic.twitter.com/iVo9gbiuL8

Earlier in the day, hundreds of protesters gathered outside of Trump Tower on Fifth Avenue and the Trump International Hotel on Central Park West, chanting "Throw him out!" and yelling at NYPD officers.

Protestors have gathered in front of Trump International Hotel, chanting “Throw him out!” pic.twitter.com/FpboS1HTLD

Marches took place across Manhattan, with one near Times Square and Bryant Park, another near Union Square and a third in Washington Heights.

A few thousand are gathered in Times Square, surrounded by a massive police presence. pic.twitter.com/AQjufUoiyh

I can’t get over how these are just proliferating and getting bigger every day. Running out to meet this march now, one of several happening in uptown Manhattan today. Never seen anything like it! pic.twitter.com/eoSkh4IQvy

There were also protests downtown, including on the Bowery and at Foley Square, with some of the protesters arriving there after marching through the streets from Union Square.

Crowd that had been gathered in #unionsqaure now marching south to City Hall. #nycprotests pic.twitter.com/bmiGTZWvmi

Protesters also took over part of the West Side Highway and sat in a street near the Port Authority Bus Terminal.

Protest turned sit in outside the Port Authority. pic.twitter.com/vgIiqxosFG

They started marching from the United Nations on the East Side@PIX11News pic.twitter.com/oHGBpZoreo

Large protests were also held in Brooklyn, with big crowds seen near the Barclays Center and the Grand Army Plaza, as well as along the Brooklyn-Queens Expressway near the Brooklyn Navy Yard and in Bay Ridge.

Huge crowd of motorcycle riders outside the Barclays Center right now. Big NYPD presence and helicopters in the air but the crowd is totally peaceful pic.twitter.com/zONkzKYSUP

Now under the #BQE near #Brooklynnavyyard: a few hundred #BLM protesters chanting with police cars trailing behind, all peacefully pic.twitter.com/VQ7rSJEvQo

One of the privileges of living in #BayRidge is getting an organizer training from @lsarsour before we march #blacklivesmatter pic.twitter.com/ddCoXrRzq1

A large demonstration was also held in Flushing, Queens. Hundreds marched on the Grand Concourse in the Bronx and in Tottenville on Staten Island too.

Chants of “Black Lives Matter” and “Get your knees off my neck” at today’s protest in Flushing, Queens, NYC pic.twitter.com/ynzKNgloRo

At the Flushing, Queens #BlackLivesMatter protests!

Connected with community reps of the Flushing projects and we're going to organize to rid of do nothing politicians who've upheld systemic racism and oppression#YellowPerilSupportsBlackPower pic.twitter.com/p2jfyBSHZp

Staten Island protestors chanted outside the 123rd precinct in Tottenville (seen here). Now headed back to the Conference House. pic.twitter.com/TBWzWyKIiM

De Blasio said police had arrested just four people and issued 24 court summonses during Saturday's protests. There were more than 2,000 arrests made through Friday morning, with the largest number coming on Sunday and Monday, when hundreds were arrested as the police tried to control looting in Manhattan and the Bronx.