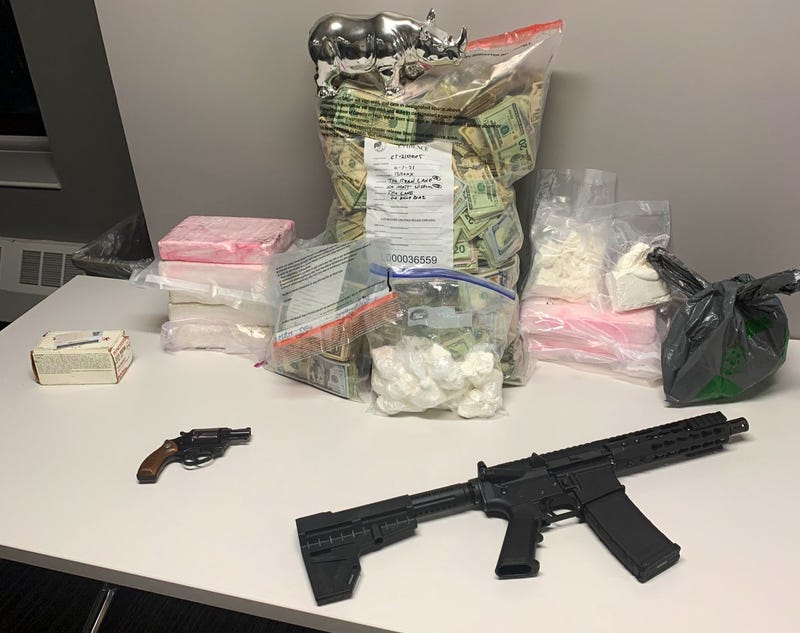 Authorities recovered over 10 kilograms of cocaine, with an estimated street value of $3.5 million, $350,000 cash, a pistol, and an assault rifle.

Jose Velez, 40, is accused of overseeing a cocaine distribution network that operated in part from his residence at 1619 Hone Avenue, in Morris Park neighborhood with narcotics shipped to New York from Puerto Rico inside Swiffer Boxes.

On Monday, June 7, 2021, authorities were conducting surveillance on Velez and observed him exit the Hone Avenue residence carrying a weighted grey reusable shopping bag and enter a grey Honda Pilot.

Agents and officers followed Velez as he drove two blocks and pulled over in front of a Mercedes Benz, officials said.

Velez got out of the Honda with the grey bag, walked over to the Mercedes, and placed the bag inside the front passenger window before returning to 1619 Hone Avenue.

Agents and officers stopped the Mercedes in the drive-thru lane of a McDonald’s restaurant located at Williamsbridge Road and Silver Street where Melina Masullo, 27, was in the driver’s seat and the sole occupant of the car.

The grey shopping bag was on the front passenger seat and appeared to contain a white brick-shaped object, authorities said.

Officers then saw a grey 2017 BMW park in front of the Hone Avenue building.

Jordan Worthley, 29, got out of the car and entered the building where approximately 20 minutes later, he and Velez came out of together and approached the Honda and the BMW.

Officials stopped Velez and Worthley and froze Apt. 1 at 1619 Hone Avenue while they obtained court-authorized search warrants for the apartment and the vehicles.

Upon entering the apartment, agents and officers encountered two teens. minors and recovered two loaded firearms, including an assault weapon, up to 12 pounds of narcotics, and $350,000.

Five kilograms of cocaine in an orange plastic bag were found in a bedroom along with a loaded assault weapon wrapped in a sheet.

A dresser drawer contained a loaded .38 caliber firearm. Hundreds of thousands of dollars in cash in multiple bags were hidden in a closet in the bedroom. Additional quantities of cocaine wrapped in twisted plastic bags were on a countertop in the dining area.

At approximately 6 a.m. on June 8, officials conducted a court authorized search of the BMW and recovered two cardboard packing boxes with shipping labels indicating they had originated in Puerto Rico.

Each shipping box was addressed to a storage facility and contained a kilogram of cocaine concealed inside a Swiffer Wet Mopping Cloths box. Snack packs surrounded the Swiffer boxes.

A third Swiffer box concealing a kilogram of cocaine was also inside the car, according to officials.

After a review of travel records, agents and officers determined that Velez had recently travelled to Puerto Rico.

The results of DEA Laboratory analysis on the cocaine, in this case, are pending. The DEA estimates the street value of the cocaine at over $3 million.

“The court authorized search of this apartment very likely prevented gun violence, which has plagued our city, and especially the Bronx,” special narcotics prosecutor Bridge Brennan said in a statement.

“High-level drug trafficking extracts a tragic toll from our communities in violence and lives lost to substance abuse.”

Worthley and Masullo are each charged with criminal possession of a controlled substance in the first and third degrees.