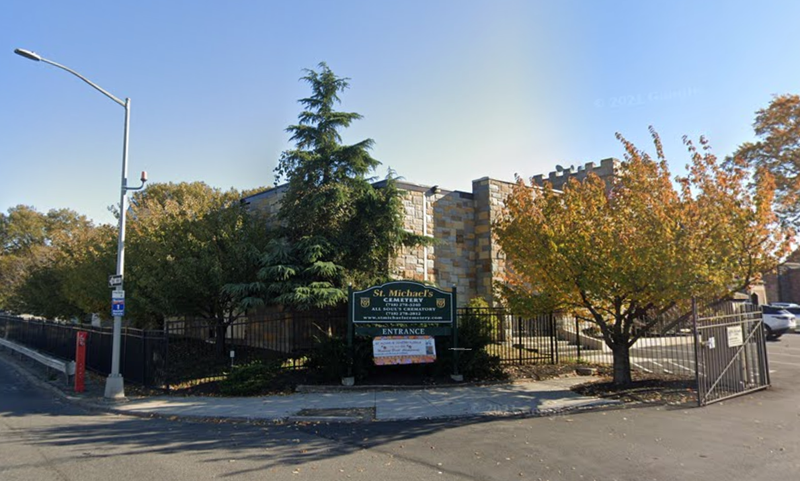 NEW YORK (1010 WINS) — The managers of a historic Queens cemetery claim a pack of dogs from a neighboring junkyard company are terrorizing staff and mourners in a new lawsuit.

St. Michael’s Cemetery in East Elmhurst filed a lawsuit in Queens Supreme Court arguing that the owner of the adjacent junkyard, Tom Tiseo, has for years allowed his dogs to roam onto the grounds through a hole in a fence on his property.

“The [dogs] would enter into the St. Michael’s Property through thebBroken fence, terrorizing patrons and staff at the cemetery and disrupting funerary services,” the cemetery alleged in court papers.

Representatives from St. Michael’s on 49th Street first asked Tiseo to repair the fence, but he allegedly refused. When the cemetery offered to repair the fence free of charge — Tiseo declined to cooperate, according to the lawsuit.

The cemetery then erected its own fence to stop the dogs from trespassing, at which point Tiseo allegedly began harassing the cemetery by piling debris on its grounds.

Tiseo began taunting cemetery staff, at one point telling them to “sue” him.

The cemetery took his advice and filed its lawsuit on Sept. 30, court documents show.

St. Michael’s is accusing Tiseo of illegally taking its land and is asking the court to identify the exact property lines. The cemetery is asking the judge to force Tiseo to clear out the section of land he has encroached on.