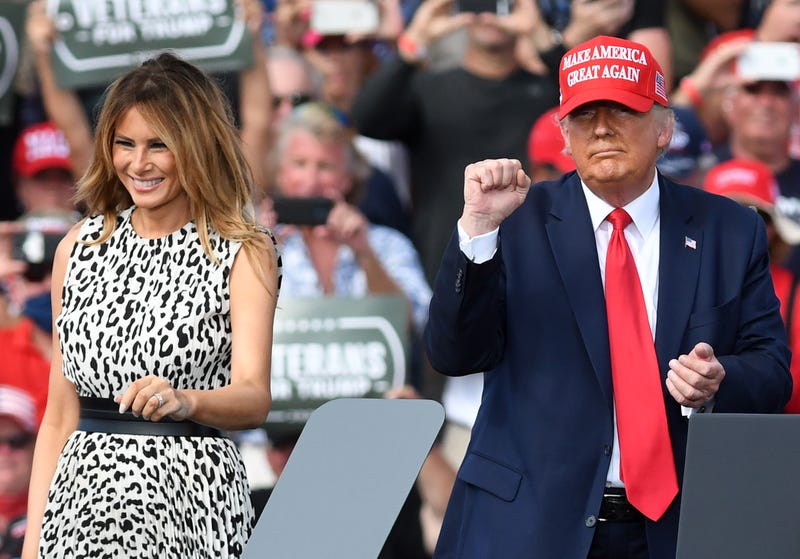 U.S. President Donald Trump and first lady Melania Trump gesture to supporters as they prepare to leave the stage at the conclusion of a campaign rally outside Raymond James Stadium on October 29, 2020 in Tampa, Florida. Photo credit Paul Hennessy/NurPhoto via Getty Images
By David Caplan

NEW YORK (1010 WINS) -- First lady Melania Trump on Sunday afternoon chimed in for the first time about the unfounded claims her husband has made about election fraud.

Joe Biden was projected to be the 2020 presidential election winner on Saturday after Pennsylvania was called for him, but Trump has yet to concede.

"The American people deserve fair elections," Melania Trump tweeted. "Every legal - not illegal - vote should be counted. We must protect our democracy with complete transparency."

The American people deserve fair elections. Every legal - not illegal - vote should be counted. We must protect our democracy with complete transparency.

But the first lady's tweet came as CNN reported -- falsely, according to the Trump campaign -- that she had actually told the president it was time to accept the loss.

Trump's son-in-law Jared Kushner also discussed conceding with the president, according to CNN.

But Jason Miller, a senior adviser to the Trump 2020 campaign, said the story is false, tweeting, "This story is not true. Given undetermined electoral outcomes in multiple states and serious voting irregularities and lack of transparency in others, Jared has advised @realDonaldTrump to pursue all available legal remedies to ensure accuracy.&